Upland Gigantor vat gets press (and video) at WTIU. article The Geeks try HopKilla at the Black Swan blog New Albanian‘s Public House are pouring Jewbelation 8, 9, 10, 11, 12, 13, and 14 in succession over the next few days. details Great Crescent tells us "The Great Crescent Brewery brewed a stout aged in barrels from Maker’s Mark distillery for a local restaurant and it’s now available on tap at Bourbon’s Bar and Grill in downtown Lawrenceburg, IN. We also have a limited amount of growlers available at the brewery. This beer is a bigger version of our stout with 7.2% ABV and 65 IBU’s, it conditioned very nicely in the barrels without becoming overdone." People’s Mr. Brown is available throughout the state in draft form through Cavalier. New Albanian‘s Public House seems to be heading toward more U.S. micros and less imports. Roger tells why. The Bier Brewery and Taproom in Indy has a Dunkelweiss and a Pumpkin on tap this week. Coming later: Chocolate Mint Stout and a Dubbel. Tastes: 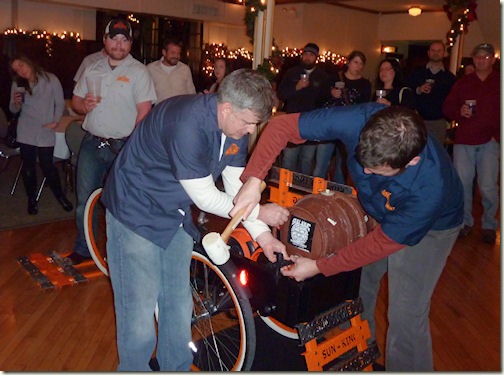 The Rathskeller’s Christmas lights and Phil Pierle’s guitar
made Sun King’s Winter Storm Warning tapping festive. The BW3 in downtown Indy has not really gone back to the old tappage since last March’s Final Four. At that time more BMC replaced good seasonals with 2 Bud Light, 2 Miller Lite, and 2 Coors Light taps. There’s 6 more from the Big 3 (including Sam Adams). DFH 120 hasn’t been on the premises since. We await your return to the dark side. What does that portend for 2012’s Superbowl? Is it a coincidence that Bud Light and the Colts are both colored blue and white? Will ABInbev buy all the taps in town? Will the 2012 Winterfest find a home (the State Fairgrounds is reportedly booked solid for truck parking)? After 2 weeks on Sunday, a show on a Monday, Brew Masters is moving to Thursdays at 8pm. Still the History Discovery Channel (thanks). Wynkoop and Breckenridge are merging. "The joint venture will create a brewing force with over four decades of craft beer experience, a production brewery with a potential annual capacity of approximately 60,000 barrels, three brewpubs, eight restaurants, and combined brewing production of nearly 40,000 barrels of craft beer in 2010." more "A Devon pub suffered a loss of trade yesterday after a tractor towing a trailer of manure crashed and dumped its 14-tonne load on the doorstep." article Hint: When making your mulled wassail remember that alcohol evaporates at 173°F.