Flat 12 Bierwerks opened yesterday (see that post). Three Pints Brewpub’s tanks are plumbed and if the Feds get out there with a license they are ready to start brewing as early as next week. First up: Scottish, Light wheat, IPA, Porter, Red. Meanwhile they are having problems with local code folks over signage and an outside walk-in. 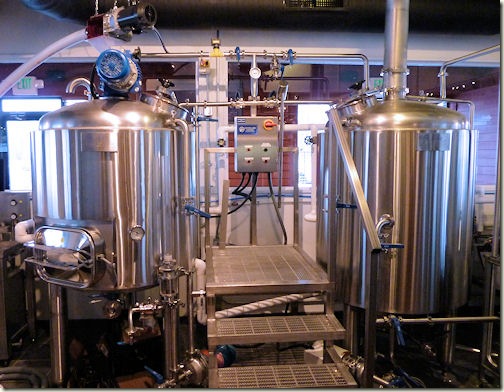 Black Swan Brewpub has 10 vessels on site and DJ is busy setting things up for a March opening. 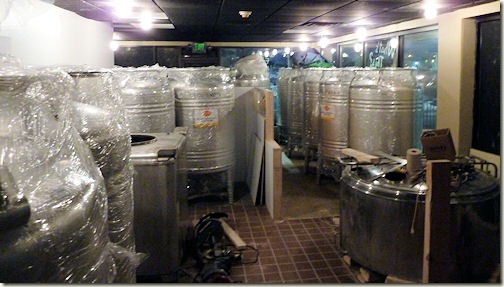 Thr3e Wise Men has beer conditioning and Jan 10 may be Omar’s opening. Kegs for distribution to the Scotty’s Brewhouse chain are being cleaned and a massive grain silo has brought a bit of country to the Broad Ripple area. Three Floyds has Jinx Proof Pils on tap and some in bottles. Krunk Monk 9% WeizenBock is also on tap. Doug Osburn writes “I am in need of a Bells Beer Batch 9000.  I was hoping to collect the complete six pack of a Bells Batch 6000, 7000, 8000, 9000, 10000 and 25th Anniversary. – somehow I missed the 9000 when it came out, but have all the others. If any of the other beer geeks out there have some I would be willing to pay or trade for it…(I have a couple Oskar Blues in the fridge right now.)” Doug.Osburn@MultiPkg.com Jason wants to remind everyone that tickets for the Winterfest aren’t at brewpubs. Get them online or at Indianapolis-area Crown Liquors stores. He also wants to remind Brugge, Broad Ripple Brewpub, and Barley Island to contact him to confirm that they will be there. Tastes:

The Ram’s 999th batch will be an Imperial IPA which will go on tap in late February. More Michigan beer: Paw Paw Brewing Company now open says the Kalamazoo Gazette. Where’s Paw Paw? Go to the Old Hat in Lawton and turn north. While in Michigan, check out Kalamazoo Beer Week. Jan 10-14. Time Magazine highlights Sam Calagione. “Alabama Criminal Codes state transporting more than five gallons of alcohol is a felony offense punishable by no less than one year but no more than five years in prison.” That’s scary. article

SlashFood picks 8 beers of 2010. Your results may vary. “What makes Infinium extra-special: It’s the first new beer style created under Germany’s beer-purity law, the Reinheitsgebot, in more than four centuries.” Now that “energy drinks” are somewhat regulated, Pabst comes out with Blast by Colt 45 to debut in April. Will come in strawberry, lemonade, raspberry watermelon, grape, and blueberry pomegranate.