Mail from Kiera at New Boswell. "We’ve been on tap at Little Sheba’s in the Depot District in Richmond for a few weeks now and people really seem to like it!  Rod is involved in the planning for an Oktoberfest in the Depot District as well.  I believe this will be the first Oktoberfest down there.  We’ll be at the Microbrewer’s Festival as well as a new festival in Winchester called Junefest on the weekend of June 25th." Big Woods Construction Pictures A slide show that mysteriously doesn’t show the new vessels. A weeks, and weekends, are ahead spreading out past all corners of Indiana.

Look for Fullers Laverstoke Organic Ale and Lager which have just gotten to Indiana. Goose Island will add to their Belgian line in Fleur next month. Pale Ale, 7.0%. Blended with hibiscus and kombucha tea. In October they plan Lolita, but there’s confusion on whether it’s a raspberry or cherry. Hints for Homebrewers – Put Quality Wine and Ale Supply’s blog in your RRS. 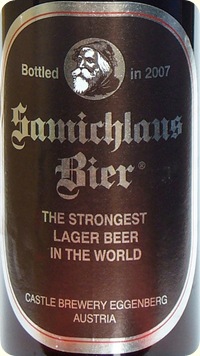 No kidding. Ontario has revoked their version of label approval for Samichlaus. "The Alcohol and Gaming Commission of Ontario has decided the beer’s label contravenes rules against advertising to children. It features the name of the beer, Samichlaus, a Swiss-German nickname for the saint behind the Santa Claus legend, and a small black-and-white bearded figure." I know my son wants some of this beer for Christmas, but then he’s 32. Jay Brooks’ take

Fosters says it’s looking for a buyer for it’s brewing operations. MolsonCoors already owns 5% of that business. MC recently bought 51$ of Hebie Si’hai Beer Co. in China. ABInBev has started building a new brewery in southern China. Looks like the South Pacific is the next battleground. Oregon is adding a 28¢ tax per six-pack today – except for microbrewed beer. Quote of the day: "Tesco was selling below cost when it sold 24 cans of Stella Artois for £10. If the cost of duty and VAT are taken away, it works out at a loss of 6p per litre." No kidding. Beer has been banned from the first World Dwile Flonking Championship. And it isn’t even Welsh. You see there’s this bar in Norfolk that has an annual game where one team dances around a pole and one of the other team stands in the middle flinging a beer-soaked towel – that’s the dwile – at them using sticks and they get 3 points for a head shot, 2 for a body shot, and 1 for a leg shot and if they miss twice they have to chug a beer but the Nanny State doesn’t like that last part so they will chug lemonade (shudder) which will ruin a centuries old, or at least decades old, tradition and besmirch the aptly-named gazunder – a pewter chamber pot donated by Adnams Brewery as a trophy.  More impenetrable info – pictures. UPDATE: It’s been cancelled. First they came for the dwiles, next it will be the cheese rolling. Oh what? That was cancelled this year also. At least Japanese log-riding is alive and well. Bud Select 55 is truly the lightest beer in the world. proof