Cindy points out the rules for the DarkLordDay Golden Tickets are supposed to be posted this evening at 3floyds on Twitter. Jason visits Lil’ Charlie’s. 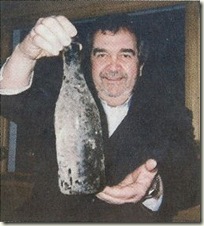 Britain’s CAMRA‘s (Campaign for Real Ale) Investment Club has bought 1/40th of the Cantillon brewery. To seal the deal the van Roys broke out a 1976 Gueuze (right). Marston’s will be yelled at a lot probably for their new process of secondary fermentation via highly flocculating yeast "beads" they are calling Fast Cask. Advantage: the beer drops bright immediately without finings and still acts like Real Ale. Disadvantage: it’s not traditional. article Interesting that it is introduced just days after Patent 5070019 ran out.