Lafayette Brewing will have $2 pints on April 15th. Takes some sting out of tax day. Early may will find a Brown Ale on tap and mid-may Star City Lager (Dortmund style).

Since the Sunday Carry-out law goes into effect on July 4th, LBC will start to be open on Sundays beginning then. On that first Sunday it will be $4 growler refills.

Beer Baron reports "Our brewery is now in Indianapolis! Jon Lang our tireless and talented brewer spent the last two weeks coordinating the move.  In addition to the HDP 20 Hectaliter system, we got kegs, bottles and plenty of raw materials! Currently the system is sitting in a warehouse, waiting on the lease." In honor of the 77th anniversary of the almost-repeal of Prohibition Yesterbeer offers a commemorative "Happy Days are Here Again" T-shirts. (we didn’t cut of her head, Rich did). Hoosier Beer Geek’s Second Annual Craft Beer Meal That Comes Before Lunch: The Recap. With lots of baconated beer pictures. If you ordered this year’s beers from Upland, they are waiting for you at the brewery. Don’t know exactly what’s going on but the Brewers of Indiana Guild (drinkindiana) is now on Twitter. Black Art Beverage, an importer of German beers is going to be coming to Indiana via Southern Italy Imports of Verona, WI. Eh? article Don’t make space in your fridge just yet as this convoluted mess dead ends with a web site that right now forwards to a broken Yahoo url. Good luck. 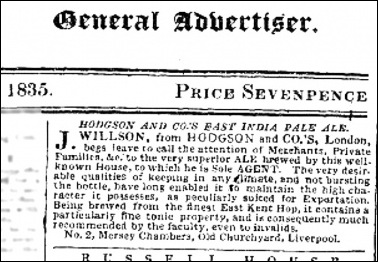 Zythophile uncovers the first ever reference to IPA. In the Liverpool Mercury. A long time after pale ales were sent to Indian. An excellent article.

"It is well known that other things being equal, the liquor keeps in proportion to the quantity of hops. Fresh beer may have from a pound to a pound and a half to a barrel of 32 gallons, June beer two pounds and a half, beer for the month of August three pounds and for a second summer three and an half. For India voyages, four pounds."