Upland‘s UpCup Homebrew competition was won by Brian Steuerwald of the FBI with a Altbier. It will be brewed by Upland in June and available in the tap rooms later in the summer.

Second was Brent McGill of MASH for Duwerdesteinekrankenschwesterbrauchen Berliner Weiss. Third was Peter Cowles of Connecticut for a Black IPA. source

Jim Ailes and David Pentzien of the Chatham Tap on Mass Ave in Indy are looking to open a new place, where the Fionn MacCools was on 116th St. in Fishers. The Fishers Tap might open as early as next month. article On June 8th, Omar will tap an Alt at the Alcatraz in Indy. An early preview shows a malty start and quick mellow Saaz bitterness. It is currently maturing at 40°. He also has a couple of kegs of Milk Stout aged on Bourbon Oak chips. Roasty when cold and Bourbon roasty when warmed. It will be poured at the RadFest and other special occasions. Ram‘s Maibock (Tool Box Bock) is appropriately light, pale, sweet and fits the warm sunny days ahead. Bob Mack posits both sides of Cans or Glass? Which is Greener? 41% Sink the Bismarck from Scottish BrewDog. Piffle. Schorschbräu (right) takes the title back with 43% ABV. "In our graciousness we had decided not to begrudge the Others the little joy of holding the title for a few weeks. Let’s not overdo this – from now on, the World’s Strongest Beer lives again where it belongs: in Franconia! Schorschbock 43% Vol., ’cause Frankonian Men don’t dress like girls.” article Now for something completely different. Last weekend my high-school-graduating niece commented as I extolled the virtues of New Belgium 1554 that I should be a beer critic. I had to reply "Sometimes I am". Now I get a chance to be a arts critic. We probably wouldn’t have heard about Rita Kohn’s play "Before the Shadows Flee" if Rita wasn’t one of the good guys of beer. 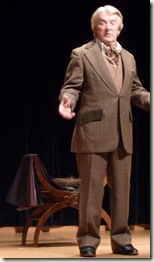 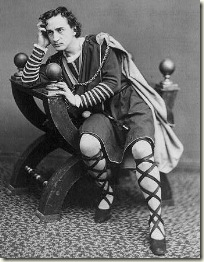 Ron Spencer (left), an actor of large emotive hands and an infinite memory, gives a 60-minute soliloquy as Edwin Booth (right) preparing to play Hamlet in the 1890s. Rita gives him period speech where "forced breath" is three syllables – suitable and quickly natural. Booth laments his father’s life, his life, Hamlet’s life, and the life of his brother, John Wilkes. It’s real and it’s fascinating. The research comes through and the attention to detail is heard in every voice of the character. Using just 3 simple props, each representing a Shakespearian mood, Ron gives life to a fascinating character who’s tragedy is mostly in his own mind. It’s not all somber because Edwin Booth was a real larger-than-life person. He owned his own theater in New York City. He had gone to the gold fields of California. He had prospered and busted many times during his long life. He had redefined the acting methods of the century to be approachable and acceptable to a changing modern theatergoer. He had even saved the life of a young Robert Todd Lincoln. He was the Richard Burton of his day. A bit of both Richard Burtons. Go, See, Enjoy Rita’s 24th play. It has one more performance at the Indiana State Museum on Saturday the 22nd at 2pm. You should be there. Ron Spencer is the artistic director of Theater on the Square.