Sun King will tap Popcorn Pils this Thursday. 6-9pm. Brewed with 150 pounds of Indiana Popcorn. Food and Woodstove Flapjacks also. Big Woods is up to 7 beers on tap. Cat Tail Wheat, Six Foot Blonde, Possum Trot Pale, Honey Suckle Red, Hare Trigger IPA, Busted Knuckle, Tim’s Big Woods Stout…QUAFF ON! The Lafayette Brewing newsletter tells us "This month will feature both a unique seasonal and a new package here at LBC.  First up, we’ll be releasing both our Star City Lager and our Eighty-Five American Ale in new, 22 oz. bombers.  Look for the Star City to be available the first week of the month with the 85 to follow by mid-month.  We’ve also got a batch of our Alpha Acid Test control beer, Alpha 60, in the tanks and ready to be dry hopped with 20+ hop varieties for the tasting on November 20.  The Alpha 60 is loosely based on an American IPA and will be released on the 20th, as well.  A limited number of tickets are still available for the Alpha Acid Test for only $20.  No tickets will be available the day of the tasting." This week’s schedule. (More here):

Here’s an article from the Indianapolis Star – Nov 26, 1996. It goes on to say "Close your eyes, and picture a typical beer drinker. Chances are, you’ve conjured an image of a fat, hairy guy sipping from a can on the sofa. Now meet Julie Grelle, president of Circle V Brewing Co., Indianapolis. She’s female, fit and educated, and wants you to change the way you think about beer. "There’s a lot more to beer than just Coors and Budweiser," she said. To help convey that message, Indiana’s eclectic local brewers are organizing a trade association, led by Circle V’s Grelle and Bloomington Brewing Co. chief executive Jeff Mease. The envision a guild modeled after the Indiana Wine Concil, which gets 5 cents of every gallon of wine sold in the state to promote wines and tourism . . ." 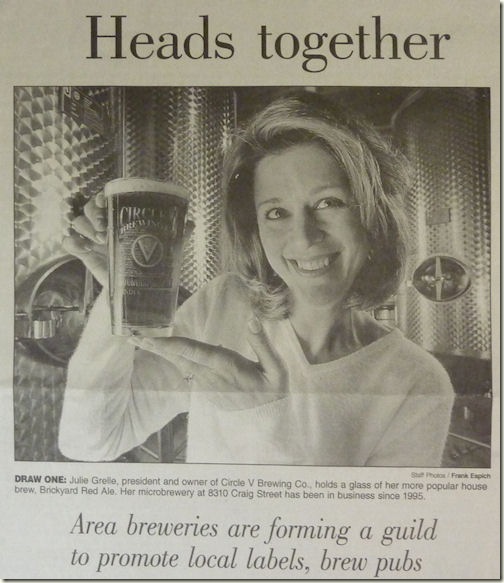 Yuengling, work, family, price, money, and Memphis. "We want to continue to be the oldest," Mr. Yuengling said, "not the biggest.” article You may have heard the sensationalist headlines recently that "beer is more dangerous than heroin". It’s a neo-prohibitionist study out of England. Here’s the takedown. It’s based on a poll, not evidence.