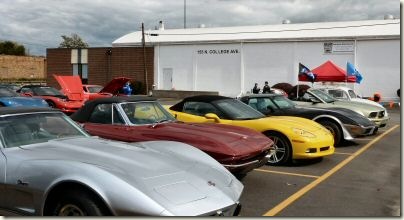 Sun King‘s oversized digs played host to a small car show where their sponsored GT2 BMW was the star. Inside at the tasting room they were serving 8 of their own including Sunlight Cream Ale, Osiris Pale Ale, Bitter Druid ESB, Oktoberfest, Saison de Taffy, Wee Mac Scottish Ale and Java Mac. Clay says they have some Oktoberfest, Tipping Point, and Alt on oak barrels, the Alt will go to the  Festival of Wood and Barrel Aged Beer in Chicago on Nov 7th. Coming up: Wheat with Hickoryworks Tulip Poplar syrup and a Belgian yeast. Some Jalepeno Cream Ale will also see the light of day at Cheff JJ’s Back Yard on Oct 31 for Hell Night. Minimal but identifiable pepper taste. Cream Ale aroma. The 25 Scoville units is certainly mouth-tingling – on the edge of needing a mitigating slice of bread. Also there will be Gallo Negro Black IPA. The coffee infusion in the Java Mac soaks up a lot of the sweet malt from the Wee Mac and adds a touch of roast from the coffee. Nicely restrained. You wouldn’t guess they are the same beer. Could Muncie be Indiana’s craft beer capital? The Star Press tells about next Saturday’s Muncie Brewfest. Coming next month: Victory Yakima Twilight Ale Does Orland Park discriminate against beer drinkers? PBR Gets Hipper, Pricier