Skip Duvall (left at right) is the new assistant brewer at Alcatraz. He’s from a homebrewer and hop head from Griffith taking the Siebel course online. During the football season, Ram is enticing patrons to watch on their Color TVs with $3 24oz mug of their base line of beers.

New Holland and Southern Tier are brought into Indiana by North Coast distributors in Valpo. These beers can be found only in the northern reaches of the state. Up until now that is. Joe Quinn of Kahn’s in Indy is going to get both of these breweries’ beers on an occasional basis. ST’s Pumpkin, Big Red IPA, and Unearthly Imperial IPA, for instance, will be among the first to make the trip south. 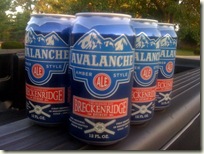 Avalanche Amber in cans. It’s in Indiana now. Boulder Beer is 30. Yep, started in a goat shed in 1979. article Flying Dog’s 20th Anniversary beer won’t be out until Oct or Nov. Raging Bitch Belgian-style IPA. "In an ideal world, beer prices at the ballpark would be based solely on the quality of the team", Wall Street Journal The Great British Beer Festival had 64,000 attendees over the 5 days; up from 59,500 last year. There were 55 Cask Conditioned beers from America. There was a separate prize for them won by Cambridge Brewing Co.’s YouEnjoyMyStout aged in bourbon barrels for two years. 2nd was Brooklyn’s East Indian Pale Ale. 3rd went to Stone Levitation. article