September starts with Omar’s new job at the Thr3e Wise Men. A loyal group helped him reduce some of the inventory of Devil’s Ale, Bourbon American Stout, and other specials sitting in the back room. Skip Duvall is taking over at Alcatraz and says the Search Light, Rock Bock, Weiss Guy Wheat, and Pelican Pale Ale will remain mostly unchanged while he puts his stamp on all the seasonals. Power House and Great Crescent breweries are joining the collaboration frenzy. Jon and Dan will be co-brewing a Belgian Abbey Dark Strong at the Aurora facility. At Power House, the Columbus Bar will be serving Dilligaf, a Rye Ale, any day now and an Oktoberfest is fermenting. Half Moon has a Rasperry Rye Beer and Skull Splitter IIPA on tap. Lafayette Brewing has just tapped their Star City Dark, a Schwarzbier with Styrian Goldings. "If you’re looking for a lighter beer with depth of colour and taste, then don’t be afraid to go dark with our darker version of our popular Star City Lager." 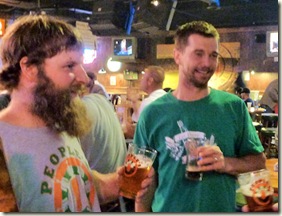 People’s Brewing was at the Beer Sellar in Castleton this week. Sandwiched between Texas Hold’em and a pool league, Chris and Fred passed out samples, glasses, and other goodies. Cavalier is distributing People’s and their IPA, Amber, ESB, and Pilsner are available to pubs over the state, not just in the Lafayette area.

Another brewpub is coming to Central Indiana. The Black Swan Brewpub at 2067 E. Hadley Rd. (the ex-Hog Heaven just north of I-70 at the Ind 267 exit) has received zoning approval from the Plainfield authorities. D J McCalister is the guy behind it and has worked with Lafayette Brewing, Oaken Barrel, Barley Island and Alcatraz. He said to zoning commission "Brewpubs in general especially in the Midwest have a long history of combining very good food, very good beer and providing excellent service to their customers." They’ll be opening as an English Public House while they source brewing equipment and do all those other little details necessary to brew beer. Black Swan Brewpub from Fork in The Road on Vimeo.
(Neil, Thanks for the tip, as always) Indiana was represented at Beer And Sweat a week ago. Jim Matt got a Gold with his American Pale Ale and credits the filtering as being very important in a keg-based competition. Eric King and Clayton Cummings of Indy were second with a Saison and Steve Llewellyn of Bloomington got a silver with a Belgian Specialty Ale. Quality Wine and Ale Supply has more homebrewing articles: 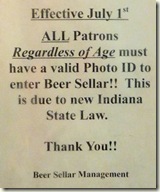 The Beer Sellar has raised the quality of their craft selection a lot in the past year (above). Right now it’s all Monarch/WCB plus a couple of Sun King but Cavalier may make inroads with taps for People’s, Mad Anthony, Crown, and New Albanian as the lineup gets more and more Indiana offerings. But please, take down this misleading sign. ==> Great Lakes Brewing in Cleveland made 80,000 bbls in 2009 and has expanded to a 150,000 bbl capacity. There are about 20 new breweries in the planning in the state of Washington. article Divers in the Baltic Sea have found a shipwreck and bottles of beer from the early 1800s. sketchy article – better article