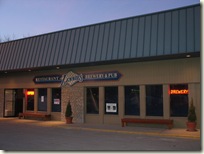 Bloomington Brewing 14 taps and 2 handpulls are filled with goodies.

Lafayette Brewing‘s Phoenix Strong Ale is on tap. 42 IBU. 7.6% ABV. "Brewed with pale, crystal and chocolate malts and hopped exclusively with English-grown Phoenix hops. Mahogany in color, this full bodied brew is malty yet retains an expressive hop character. Complex flavor profile highlights hints of toffee and tobacco. Stop by and have a pint or two of the Phoenix Strong Ale, this ale was last seen at the brewpub back in ’07." Eric Strader looks at The Livery in Benton Harbor, MI. and at Oktoberfest Beers. This weekend’s Anstich kegs at the New Albanian‘s Public House, to be tapped at 5pm and empty before 6pm – Thurs: Huppendorfer Vollbier. Fri: Günther-Bräu Lagerbier. Sat: Weissenohe Monk’s Fest. 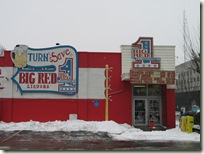 38 year old Big Red Liquors gets ink in the Indiana Daily Student (as if any IU students don’t know about Big Red). Tickets are selling well for this weekend’s Valparaiso Brewfest. article 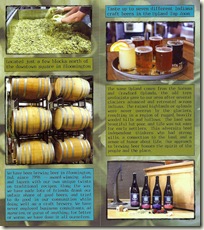 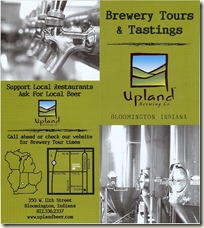 Upland has a flyer out in the interstate rest stops. I don’t think they’ll mind if we reproduce it here. Click to biggify. Indiana Senator James Merritt (R-Indy) is starting to talk about canning the card-for-carryout law. "deluged with complaints". article 1  article 2 The groceries and convenience stores have been sending out press releases again about how the liquor stores’ monopoly on cold sales is discrimination. The "Change it Indiana" petition is back up "51,000 people have signed" (which is the same as last winter – so there has not been a grass roots effort at all). We’ll keep linking to articles so you can follow the fun. article If you can read and understand this article in the Journal of Proteome Research (The Proteome Content of Your Beer Mug) we really really want you to blog on IndianaBeer.com. Sentence chosen at random: "Protonated phthlates [dibutylphthlate (plasticizer), m/z 279.159086; bis(2-ethylhexyl)phthalate, m/z 391.284286] and polydimethylcyclosiloxane ions [(Si(CH3)2O)6 + H]+; m/z 445.120025] were used for real time internal mass calibration." We’re told 6 new breweries are upcoming in St. Louis. Sam Adams will release an Oak Aged Double Red and a Wee Heavy real soon now. In fact the Wee Heavy is out in a few areas. Rodenbach Vintage 2008 should hit the shelves in 750ml bottles in November. Rick Lyke is planning a 10-day Belgian trip for 14 people in September, 2011. To be one of them, see Realbeer.com Remember Malt Liquor? Here’s the history.