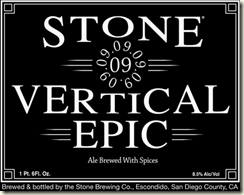 Stone’s Vertical Epic 09-09-09 will be, according to their label approval paperwork “This is quite a complex and layered beer. Bold and smooth chocolate malt flavors combine with a Belgian yeast lending tropical fruit/banana flavors and hints of spiciness, all complemented by citrus notes from an addition of tangerine peel. Rich vanilla beans add a nice counter to the chocolate malt – actually enhancing the chocolatiness. The finish is smooth, with additional traces of vanilla and toasted characters from French Oak. The goal for this edition of the Stone Vertical Epic Ale series is to be reminiscent of artisanal chocolates accentuated with orange.” BJ’s Restaurants have a prolific public relations department and a little corner of the net called Search=beer+indiana is covered with their releases whenever a new store is opened. But this one takes the cake as it is in the German newspaper Welt’s onlne edition: BJ’s Restaurants Celebrates Father’s Day Weekend With Free Commemorative Pint Glass and Premier Golf Getaway Sweepstakes for Dads Thanks Heaven for Beer tells how Beer, Bikes, and Better Business works for New Belgian. The Potable Curmudgeon tells about Kentucky Ale. BeerNews‘s story about Upland’s new vat is OK but ours at least included Scott Johnson’s pictures.

Sparklers. It’s not July 4th yet, so we must be talking about the way northern Brits like their beer – forced through a tight mesh to produce a creamy head and accentuate the bitter aroma. Southern Brits like a more relaxed pour with a smaller, bigger bubbled, head. A pour that lets the bitterness stay in the beer for a dryer finish. Sometimes drinkers have to ask the landlord to please remove the sparkler if they want a southern-style Ordinary, ESB, or IPA. There’s a lot of difference. Roger Prost says of a side by side side test with Greene King IPA "I was able to detect the sharp difference in aroma and flavour of the beer. I shall always prefer the southern style, with hop aroma and bitterness lingering down the glass". Now some pubs offer a choice with Drinks Dispense Group’s new fount. The lever on the swan neck controls the sparkler. Quicker and more sanitary than putting an aerator on the end of the tap. They say it also raises the pour level above the bar so the customer can watch the action and as a plus, it’s easier on the barman’s back. Cool idea. This from the RealBeer as well as the BelgianShop newsletter (don’t know who grabbed from who) and probably on Snopes soon.

A beer lover from Oberhausen, Germany, has topped his own world record by gulping down 50 litres of beer in 4 minutes 55 seconds, belga reported on June, 12. Philipp Traber, 35, thus improved by 17 seconds his previous record: in 2001, he had emptied 250 glasses of beer in 5 minutes 12 seconds, which was registered in the Guinness World Records. The record holder said he owed his success to his brother who had served the necessary 250 glasses of beer. The price of the beer he drunk was one euro per glass. The money will be donated to a charity organization, it is reported." 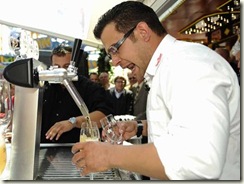 Huh? 50 liters? Isn’t that sorta like 105 pints. Minus spillage. Ain’t buying it. A German paper says

Which (crudely) translates to

A 35-jähriger gastronomer from upper living (Oberhausen) broke its own world record in the beer high-speed tap. The acting world record owner Philipp Traber tapped 50 litres beer on the upper houses Fronleichnamskirmes in 4 minutes and 55 seconds. Thereby undercut the gastronomer its own Bestzeit from the year 2001 by 17 seconds. It created it thereby in the Guinness book of the records.