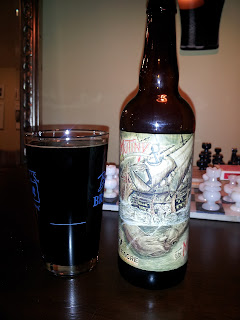 Mutiny and the Mollusk, the collaboration between Half Acre and Three Floyd’s was my pick for International Stout Day.  The reasoning of course, is that it is a rare breed and it happens to be an oyster stout.  Now, my beer acumen is not nearly at the level of say a Nathan Compton or a Bob Ostrander, so I actually had to Google the term oyster stout to see what it was all about.

Don’t let the name fool you, there may or may not have been oysters used in the brewing of this beer.  I say this because I am hard pressed to find any information about the ingredients, what the brewers intended for it to taste like, or why they decided it would be a good idea.  Oyster stouts are by design, stouts to be consumed while eating oysters.  You’d think I would have done this research before drinking the beer.  Alas, I had no food as a companion to my ale and had to taste the beer on its own merits.

The beer, as suspected, was very good.  Rich, dark, and dare I say powerful, this stout slams you down with its coffee laden flavor if served chilled.  As the room temperature catches up, the stout mellows and isn’t nearly as bitter (bitter as far as a black coffee is concerned).

I have to commend Three Floyd’s on this one.  They simply announced the collaboration and released it at the brewpub so that their adoring public could line up to buy a bottle or two.  Nothing particularly flashy and definitely not the hop heavy flavor most of their beers are notorious for, which may be the influence of Half Acre.  I must admit, I’ve never had a beer from Half Acre, which is a shame because they are so gleefully close to my home.

Mutiny and the Mollusk was released in March.  I don’t really know why I let it age for so long, maybe just wasn’t in the stout mood at the time.  I do have another bottle, so maybe I’ll actually get oysters for that one.

2 thoughts on “Mutiny and the Mollusk”