My first experience with the National Homebrewers Conference was 2008 in Cincinnati when there were an estimated 950 attendees. We registered and headed over on kind of a last minute whim since it was so close to home, and I’ve been hooked ever since. By 2011, as the popularity of homebrewing continues to skyrocket, the conference was up to a sellout capacity of 1900+ attendees. Facility limitations at the hotel this year kept the attendee count around 1800, which resulted in registration selling out in less than two days and unfortunately leaving a lot of people behind. Accommodating the popularity will clearly be an issue for the American Homebrewers Association moving forward, but they still consistently put on a good show once you’re there. The best reasons to attend this conference are (in order):

This year’s conference was held in Bellevue, WA near Seattle. It’s a beautiful area but I have to say it more than lived up to every stereotype you’ve ever heard about dreary weather. The conference follows the same basic format each year, so here is a recap of this year’s event that will give you an idea of what to expect in the future. The local committee always organizes pre-conference events for the two days prior to the conference that typically involve brewery visits, beer dinners, and unique local offerings like this year’s visit to Yakima Valley hop farms. Thursday. Thursday morning kicks off early with judging of the National Homebrew Competition Final Round for those who have signed up for judging. I made it in from Portland that morning to hit registration and pick up my commemorative beers. The first collective event involves getting beer for the Welcome Toast followed by some afternoon seminars where you will likely be served beer. If seminars aren’t your thing, there is an Exhibitor Hospitality Suite where you can learn about great homebrew products from retailers like Lafayette-based Blichmann Engineering, sample beers from commercial sponsors, and sample more beers from the two homebrew clubs working that shift. Did I mention there is a lot of beer at this conference? But my afternoon took a slight detour to respond to the Lagunitas Hop Stoopid Challenge. Lagunitas sent around their recipe for Hop Stoopid, an Imperial IPA, prior to the conference and challenged attendees to brew it at home and bring the results to a reception Thursday afternoon. Tom Wallbank and I accepted the challenge and headed down to consume some free food and beer on the dime of one of the largest craft brewers in the country. The “reception” was held in a very crowded hotel suite that reminded us of an old college apartment party. The bedroom was turned into a dining hall with a sandwich and fruit spread, while (many) buckets of ice had been retrieved the turn the bathtub into a makeshift cooler with multiple varieties of Lagunitas beer. It was not a competition, just a sharing event, so the best I could do was a “good job” from Lagunitas head brewer Jeremy Marshall. Of course, he’s somewhat obligated to say that. But we managed to get our hands on enough free beer that an inadvertent nap resulted in being tardy for Pro Brewer’s Night. And I do have five gallons of Imperial IPA that’s quite enjoyable and would cost a fortune at the store. The main event for Thursday is Pro Brewer’s Night which I used to describe as attending the Indiana Microbrewer’s Festival with no lines. Except there are now some lines. This event provided the first clue on limitations of the hotel’s facilities as the Grand Ballroom could not hold all the breweries and the festivities spilled out into two adjacent hallways. Because of some strange local law that prevents breweries from serving unless they are located in or distribute to Washington, the emphasis this year was squarely on local breweries. But it gave us a chance to skip the bigger boys and sample great beers from the likes of Black Raven, Chuckanut, Ninkasi, and Pike Brewing. As with every night of the conference, you then have the option of the late-night hospitality suite that serves beer until 2am. In the past this had consisted only of a single suite where beer was poured by homebrew clubs. This year a second suite was added where distributors poured samples of commercial beers. This is basically the place to go when you want to hang with new best friends that kind of look at you funny the next day because they can’t remember your name either. 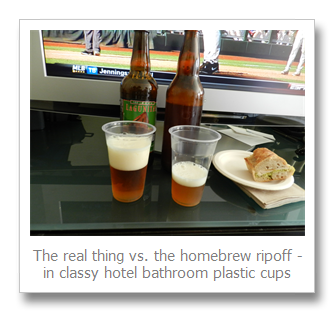 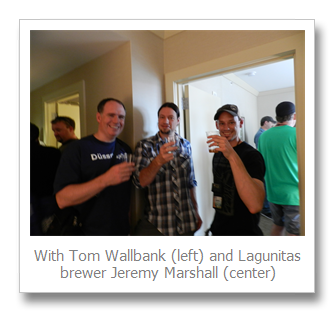 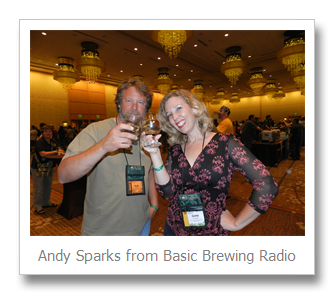 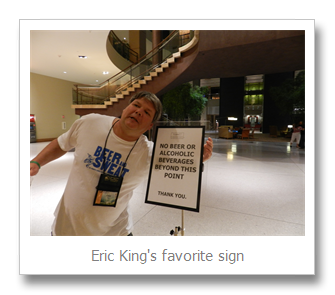 Friday. For some attendees, the day starts with seminars at 9am. For others, it starts with holding your head and finding a beer in your room for a little hair of the dog. No comment on which category I fall into. The keynote address that afternoon was delivered by Pike Brewing founder Charles Finkel. Before starting in commercial brewing, it turns out Charles was one of the first American importers of British and Belgian beers so there were some very interesting stories behind the early days of working in that business. And he wore a bowtie. To finish off the afternoon, I did attend a few seminars and am now very interested in the ElDorado hop which has a flavor reminiscent of blueberries. And there was more fun to be had at the Exhibitor Hospitality Suite. But we’re really here to talk about Club Night. It’s one of those things in life that probably can’t be properly described until you experience it. Kind of like Bourbon Street during Mardi Gras – but way more geeky and with slightly less public urination. The simplest way to describe it is a massive beer festival that only serves homebrew. But that would ignore the elaborate booth themes, costumes, videos, gadgets, and all the assorted pranks and prizes that homebrewers can imagine. Themes this year included monks, mad scientists, ghostbusters, The Big Lebowski, and my personal favorite…..#OccupyNHC from the creative geniuses of the Arizona Society of Homebrewers. And the beer is the most unique collection of brews you’ll find in one place from creative minds all across the country. My observation over the years I’ve attended is that the beers served have evolved to become a little less weird, but better….which probably makes sense. What results is the biggest homebrew party you can imagine with something odd occurring in every part of the room you wander into. I’d love to tell you I took detailed notes of my favorite beers from the evening, but I was handcuffed to another person for most of it. I can only say that if session beers are becoming trendy, that seemed pretty lost on this crowd. The late-night hospitality suites were hopping again, and after a full night of homebrew we managed to find the suite where commercial beers were being poured. It’s always interesting to see who’s still standing at that point, and we managed to find Pete, the youngest member of the Blichmann Engineering team. The poor guy still had to work the Exhibitor Hospitality Suite the next day. 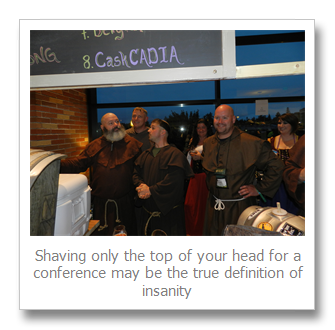 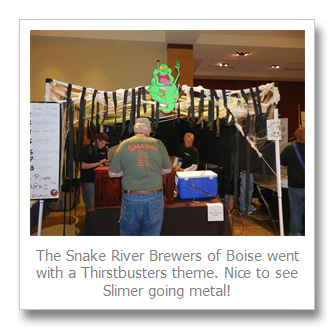 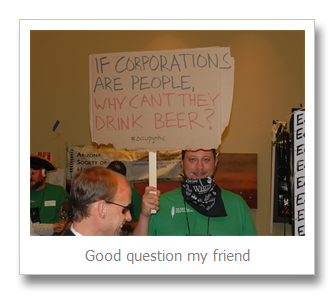 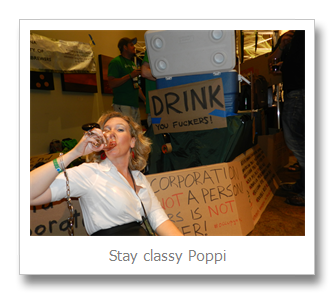 Saturday. More seminars at 9am for some. More holding of head and hair of the dog for others. My eventual seminar schedule for the day featured a Water Panel that included Indiana’s own Martin Brungard, author of the Bru’n Water utility that you should really check out if you homebrew. The AHA did a nice job of mixing seminars that appeal to all experience levels of brewing from Brew in a Bag and Brewing World Class Extract Beers to the Water Panel and Exploring Fermentation Attenuation if you wanted something a little more technical. The conference concludes Saturday night with the Grand Banquet & Awards Ceremony which features a menu created by Homebrew Chef Sean Paxton and five varieties of beer donated by Rogue Ales. It’s become sort of a tradition to line up and tailgate outside the banquet before the doors open and you never know who you’ll bump into. Last year we ended up next to the founder of Alesmith in San Diego and this year we received pours from a brewer at North Coast Brewing. You can also bring in an assortment of beers to the banquet to share at your table in case the Rogue beers just aren’t enough. I’ve found the entrees here to be a little hit and miss, but this year’s salmon brined in Cap’n Sig’s Northwestern Ale, brown sugar, and thyme was outstanding. You spend a while after dinner listening to the local organizers talk about how great every member of their group is, and then the AHA Governing Committee Recognition Award is presented. The event is capped off with the final round medals for the National Homebrew Competition. Congratulations again to Indiana winners Robert Heinlein, Rob Meinzer, Michael Pearson and Bill Ballinger, Kevin Pritchard and Matthew Oakley, Bill Staashelm, and Tom Wallbank. These beers are literally 1 in a 100 (or 200). This is my chance for an annoying tangent about how great the homebrewing scene is in Indiana. Taking 6 of the 69 medals awarded for beers that spanned all 50 states and Canada is an outstanding showing. I don’t know if many around the country think of Indiana as having a great beer culture, but by my count we tied Texas for the second-highest number of beer medals after California (yes Minnesota, I’m conveniently excluding meads). The scene here is very strong and very competitive. 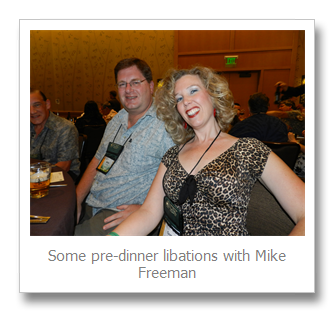 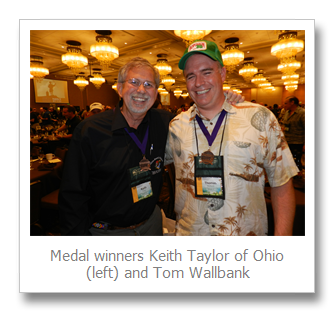 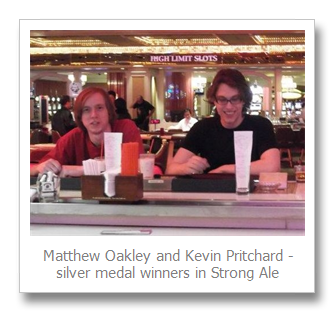 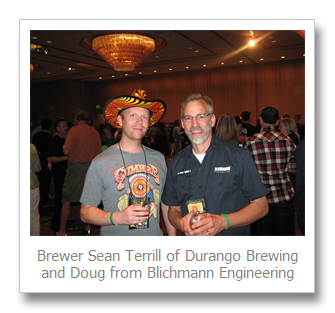 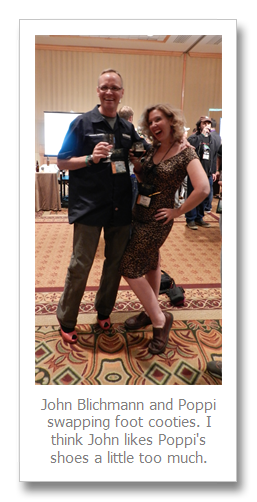 Next Year. Next year’s conference will be held in Philadelphia on June 27th – 29th. The exact location is yet to be announced and it will be interesting to see how they handle it. The AHA clearly needs to be concerned about welcoming as many people as possible, but it seems hard to imagine the event would have quite the same feel inside a non-descript, cavernous convention center. But maybe that’s just the old man in me wanting to hang on to what I’ve become familiar with. Regardless, I remain of the opinion that every homebrewer owes it to themselves to do this once in your life. Cheers, Nathan