Steve has always had a dream… as many home brewers do Steve wanted to open his own brewery. Arlyn, his wife, is really into food. Quite some time ago the two decided to live the dream, seeing what will happen. 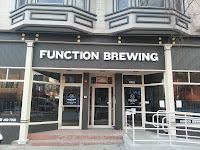 As many who have followed them on Facebook for many months know, it has been quite a process making the dream a reality. Yet, this week Function Brewing, 108 E Sixth Street in Bloomington, just a block from the trendy town square, opens officially serving a host of small plates and a wide variety of beers.

So I asked myself, what might differentiate Function from all of the other micro- and nano-breweries opening everywhere. Consider location, ambiance, experience, and taste.

What may ‘sell’ this place is the combination of location and decor! Don’t get me wrong the beer will be solid, we will get to that. The menu looks astonishing. But there are few truly ‘classy’ local pubs with reasonable prices. Steve and Arlyn ‘rescued’ an old facility (with the help of the property owner) exposing brick, hand crafting their own table tops and bar, carefully applying color to the walls, and making this place a counterpoint to The Tap, which is currently the classiest beer bar for 50 miles (I think I’ve been to all in that radius) and it is on the opposite end of the Bloomington town square. Just the right touches makes the place comfortable and classy while still allowing kids in case friends can’t get a babysitter.

Location, steps from the Bloomington square (1/2 block) and across from one of the city’s many art galleries. This can be a great venue for those coming into town for a weekend as well as for locals looking for one more place with good beer and wine. 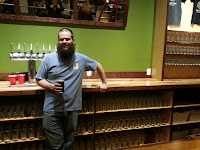 Local… local, hand-crafted beer. Steve Llewellyn is an early member of the local Hop Jockeys home brew club that have nearly science-based meetings (including talks by some I.U. based PhD folks on their subject). Okay, at times a bit nerdy for me but this has steeped Steve in sharing some of the best concepts in brewing. Steve will stay busy on a 2 bbl system but has the opportunity to change up beers frequently.

Ah, the beer…. I tasted a smoked porter that was delicious. This porter offered a light smoke with a nice smooth base beer and a decent amount of roastiness concocted of Magnum and Willamette hops and a variety of malt including some chocolate, Munich, and peated malt at 5.8%. Having a large number of taps (coolest tap handles in town, too) of fresh local beer is a big plus. For opening they plan 9 beers from a Falconer’s flight single-hop pale to a Belgian pale, an IPA with five hops, a milk stout, a coffee milk stout and more. All are at a reasonable price, with opening prices at $4 per pint. 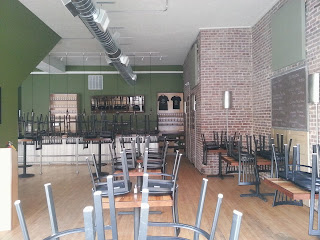 The small plates menu includes a cheese and charcuterie plate, a dip trio, a goat cheese and fig-onion jam on crostini, dips, salads, home-made soup, hot and cold sandwiches, and more all under $15. The menu asks vegans and vegetarians to discuss their needs with their server.

Function, waiting in style
to get busy!