I explored some of the Indiana beer scene on New Year’s Eve with some friends and hosted the Inaugural Beer Me Wilk! Beer and Wine Event.  Sponsored exclusively by Beer Me Wilk!  (Which is kind of a joke because that’s me and sponsorship merely means I bought all of the supplies)

My handy guide for the evening was provided by CraftBeer.com. If you ever have any question as to the proper food to serve with your craft beer, this guide is your best place to start. I thought my plan was a simple one. I picked out three cheeses I wanted to serve, the dish I wanted to make, and the dessert I wanted to eat. From there pair the beer and wine.

The first course of the evening was a Wisconsin butterkase paired with Hoosier Honey Wheat from Bee Creek Brewery in Brazil, Indiana and Columbia Crest Cabernet Sauvignon. The cheese is a very mild, soft cheese that is amazingly smooth. It paired perfectly with the Hoosier Honey Wheat. Made with Martinsville honey, the sweetness is very prevalent when drinking this brew and only on the tail end of the swallow do you know that it is a wheat beer. Although wheat beers tend to be perfect summertime treats, this honey infused version seemed to fit New Year’s Eve wonderfully as a first pour of the night. This was by far the best paired beer and cheese of the evening. 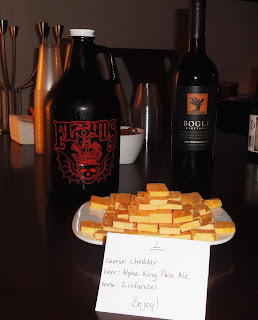 Second course was cheddar cheese paired with Alpha King from Three Floyd’s in Munster, Indiana and Bogle Zinfandel. The pairing here was an utter disaster. Unbeknownst to me, the cheddar was very sharp. Where was that on the packaging? As a pale ale, Alpha King should have matched well with a mild cheddar. Oops! No complaints about the beer however. I’ve had several Alpha Kings before and with this pale ale you get a hop explosion with every sip. There is nothing pale about this beer either as it is a rich amber color and the citrus content behind the hops makes this a great beer for any occasion. 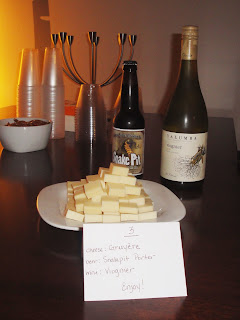 Course three was Gruyere paired with Snake Pit Porter from Oaken Barrel Brewing Company in Greenwood, Indiana and Yalumba viognier. Gruyere is a very potent, nutty cheese and would have paired very well with a nutty porter. The taste combination here was what I would describe as merely ok. Snake Pit is not a bad beer, it just didn’t go with the cheese. This porter is very sweet and certainly has the coffee and chocolate notes that you find in Baltic porters and imperial stouts. I would recommend grabbing the beer but leaving the cheese in the fridge. 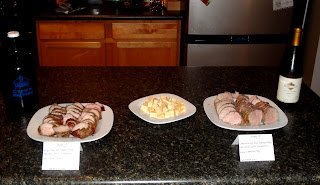 Our main dish featured two pork tenderloins. The one on the left was marinaded in beer, the one on the right in wine. Although the recipe originally calls for venison, it went perfectly with pork tenderloin. The brown ale used was Crown Brown from Crown Brewing in Crown Point, Indiana and the wine is Kendall Jackson chardonnay. For the chardonnay recipe go here. What can I say about Crown Brown? I love it. It is certainly my favorite out of my hometown brewery. The roasted malts of Crown Brown are not over-powering and the smoothness of the mouthfeel make it so easy to drink. It’s lighter on the alcohol than some of the other darker beers but I certainly appreciate it because I like drinking more than two at a time. The growler didn’t make it passed the night because I went to it after all the tastings were done.

The reason this picture doesn’t exist is because no one was interested in dessert. Bellies full of beer, wine, cheese, and pork were not ready to accommodate dessert and the midnight champagne toast. But do not fret! Of course I had some Brass Knuckles! Oatmeal stout being one of my favorites I could not pass up the opportunity and decided to have a bottle. It was good. It would be rare for me to be disappointed by an oatmeal stout. The usual suspects of coffee and chocolate were very noticeable and the roasted malts made the beer thick enough to eat. Yes, there is some exaggeration there, but the smooth, thick brew is a perfect dessert companion.

If you want reviews of the wine, buy them and drink them. I don’t drink wine so I have no idea how they went. I only have one bottle left so I’m guessing they were good. As far as suggestions for the beers, buy them all. Not only do they taste good, you would be supporting Indiana brewing.

Overall a very successful event and very much looking forward to the second annual on 12/31/12. Thanks for reading and drink craft beer!﻿