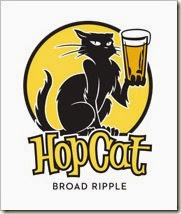 You may have seen the announcement circulating earlier today that a HopCat restaurant and bar will be opening in Broad Ripple. The craft beer bar scene has come a long way in Indianapolis, but this will be another big step forward if my experiences with HopCat in Michigan are any indication. Additional tap space is always welcome given the number of new breweries opening in the area, and I would expect HopCat to be very supportive of the local scene in their tap selection. Here is the full press release for you to drool over: BarFly Ventures today announced plans to open HopCat – Broad Ripple, a restaurant and bar featuring 130 craft beers on tap in the heart of Indianapolis’ Broad Ripple Village cultural district. HopCat – Broad Ripple, 6280 N. College Ave., across from the historic Vogue Theatre, will be the third location for the award-winning HopCat, which was named the No. 3 Beer Bar on Planet Earth by Beer Advocate. The draft system will be the largest in the city with many of its taps dedicated to supporting Indiana’s craft brewing industry, as well as craft beers from around the country and the world. “Broad Ripple’s history as a place with an artistic heart and musical soul made it the ideal area for us to open our first HopCat outside of Michigan,” said Mark Sellers,  founder of HopCat. “We see HopCat as a gathering spot where people from all walks of life can come together to enjoy great food and drinks. We also look forward to showcasing the liquid art being produced by Indiana’s brewers. ” HopCat – Broad Ripple will be located at the southwestern corner of North College and Broad Ripple avenues on the ground floor of the Broad Ripple parking ramp. The unique design includes seasonal outdoor seating along College Avenue and a keg storage room with windows on the street and inside the dining room where guests will be able to see the complex system used to keep more than 130 kegs fresh and ready to pour. HopCat – Broad Ripple is expected to open in early August, pending approvals by local and state officials. Hiring for management positions is under way with special hiring events for more than 100 other team members expected to begin in June. Resumes may be submitted to jobs@barflyventures.com. HopCat’s food menu – “food your Mom would make if she loved beer” – headlined by its famously addictive Crack Fries, includes an eclectic mix of fresh shareables, sandwiches, burgers, salads, wraps and big plates. As with other BarFly Ventures locations, HopCat – Broad Ripple will implement an extensive composting and recycling program. This program has reduced the amount of waste BarFly’s six bars and restaurants send to landfills by more than 90 percent in the past three years. About HopCat Founded in Grand Rapids, Mich., in 2008, HopCat is the flagship brand of BarFly Ventures. HopCat is a destination for locals, tourists and beer fanatics alike, earning international accolades as such as: “No. 3 Beer Bar on Planet Earth” by Beer Advocate Magazine, “No. 2 Beer Bar in America” by CraftBeer.com and “No. 1 Brewpub in the United States” by RateBeer.com. HopCat – East Lansing opened in August 2013 in record setting fashion, hosting a 100-tap takeover in partnership with Short’s Brewing Co. In August of 2014 HopCat – Broad Ripple will open in Indianapolis with the city’s largest number of craft beers on draft. HopCat – Detroit will open with 130 draft lines and a live music venue in the heart of Detroit’s Midtown neighborhood. Cheers, Nathan