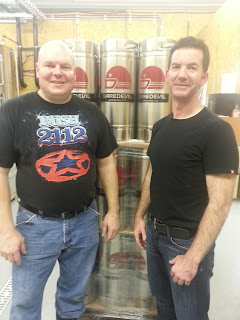 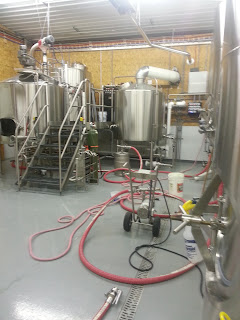 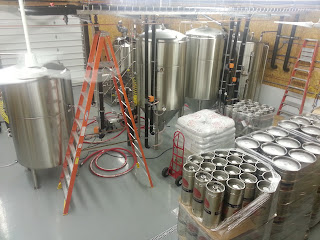 Daredevil brewing is the carefully engineered marvel (pun intended as Marvel comics published the title Daredevil comic) of two of the biggest winners or Superheroes of homebrew competitions in Indiana ever. If you scrolled back to 2010 the Brewers Cup Competition, you find that between Bill Ballinger and Michael Pearson they took home awards in over one-half of all categories, some with multiple awards within a category. Ballinger alone has, over time, won a ribbon in every category and was Home Brewer of the Year in 2009 and 2010. Pearson was Indiana Home Brewer of the Year in 2008 and 2011 and has one in the National Homebrew Competition 4 of the last 6 years. Even as they were accepting those awards they were planning to hit the commercial beer scene.

Walking into their modern brewery in Shelbyville, IN, you would never imagine you were in a brewhouse that just starting shipping kegs a few weeks ago on January 18, 2013. It is perhaps fitting that former Pro-Brewer turned pub owner Kevin Matalluci of Twenty Tap near Broad Ripple was the first to take on the Lift Off IPA as it expands rapidly to nearly 50 accounts in central Indiana check current locations here . And also noteworthy that owners of trend-setting The Tap beer bar in Bloomington have vowed to keep both Lift Off and the Seasonal, Muse belgian Golden, on tap! At The Tap, Bloomington, which has 50 beers on draft and 500 in bottle, both Lift Off and Muse zoomed to Top spots in draft beer pours within weeks of availability.

Daredevil claims to ‘manufacture smiles’ with their beer. They have started with Lift Off IPA, their one flagship beer, to represent their “lift off,” like a rocket, from a Daredevil countdown. This beer is a very balanced IPA with malt character and a mix of citrus notes, some floral character and a hint of resin from a proprietary blend of hops.

Daredevil is both efficient and environmentally conscious. Every drop of water used, including water to cool the beer, is conserved and used in the next batch of beer. This 10 BBL batch brew system has the smallest ‘grant’ I’ve ever seen. This ultro-modern facility can ferment twice the brew capacity (20 BBL fermentation) allowing Michael and Bill to put in one long day and have a very large capacity of beer to go into the kegs.

Ballinger (photo above, on left) and Pearson (on right) are not just brewers, they are branders, and strategists. The brand name, Daredevil, is easy to remember. The logo punches out at you with a red helmit with big D styled into it. Tamre Mullins now of Roundpeg, Indy, wrote in their blog, “The Daredevil logo is solid with a bold red helmet and nice detail of a D as the face mask. It reminds me of a modern stylized Evel Kenevil.” While the temporary tap pulls stand out nicely the future pulls (see photo below, future pull on left) will really differentiate from the crowd!

Kegs only! These are beers that need to be explored and at least for now the concept is deliver in kegs and get wide distribution throughout central Indiana. As I write this growlers can be filled at Tomlinson Tap Room in City Market, Indianapolis. Daredevil is a production brewery using World Class Beer to distribute and with no tasting room. Bill and Michael wish to focus on what they feel they do best: brew great beers and leave the distibution to the experts and the serving to YOUR favorite place. Shane Pearson is an active partner working in social media so tweet to @DaredevilBeer and ask if it will be on at your favorite watering hole or check their updated account list on facebook (like: Daredevil Brewing).

This is one of the newest breweries, one of the larger brewing facilities and one with perhaps the most experienced “new” pro brewers! 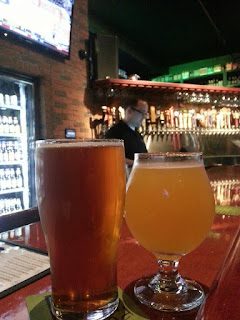 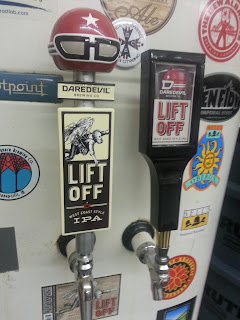