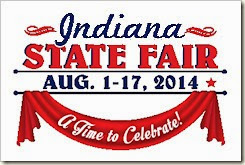 This will expose a million Hoosiers to good beer. For the first time since 1947 beer and wine will be sold during the fair itself. The only restriction in the law is that sales are by the glass only in a controlled area. No bottles, no carryout. Of course the State Fair Commission has to approve the marketing and reserve a spot, tables, chairs, tents and clean-up services for the area. They are VERY likely to do that and have previously said they want to see the State Fair represent this part of Indiana’s agricultural (and cultural) heritage. One thing to keep in mind. It probably won’t be just Indiana-brewed beers. While the Brewers of Indiana Guild members will glom most of the taps and all of the advertising, the Commerce Clause prohibits the state of Indiana (which finances the Fair) from discriminating against inter-state sales. In 2005,for instance, Michigan was told they need to allow interstate wine shipments to the public if they allow Michigan wineries to do the same. So it would seems that Bell’s or Schlafly or one of the Louisville breweries could ask politely to be included. Actually their Indiana distributor should do that of course. And that’s not a bad thing. The Bottom Line is that someone with a retail license, a distributor, a Rising-Moore, or the B.I.G. itself will do just fine setting up an outdoor stand and selling craft beer. With a million people passing your door in three weeks and your door being the only adult watering hole at the Fair (except the smaller wine booth) the biggest problem will be staffing and handling the line – besides keeping the trash cans clean. The Real Bottom Line will be the exposure of Indiana Craft Beer to tens of thousands of new customers. That will help the existing breweries and will encourage even more start-ups. Hooray.