Mainly produced in Scotland (no surprise there). The style evolved separate from British Pale Ales in the 20th century and the differences are due to the different malts available, cooler fermentation and aging, and also in large part to the softer water. Barley is grown throughout Scotland and native malt is used almost exclusively by those brewers. Interestingly, northern barley is most used for Scotch Whisky and southern barley for beer. The Treaty of Union that married Scotland and England in 1707 was negotiated to eliminate the English malt tax on Scottish barley. Scottish ales use less hops, seemingly because hops don’t grow well in Scotland. They are also sweeter and richer due to more dark malts and a higher finishing gravity which leaves more unfermented sugars in the final beer, giving it a thicker mouthfeel. Historic styles of Scotland include unhopped varieties such as Heather Ale. Heather, ginger, pepper, spruce, bog myrtle, and herbs have also been used in beer made from combinations of malt, fruit, and honey as early as 2000 years ago in Scotland.

Currently a bit of roasted unmalted barley is used to give a darker color and a characteristic malt sweetness to Scottish Ales. One hundred years ago they would have used barley that floated during a water bath. This barley was dried, sometimes over a peat fire, while the rest of the barley went on to be malted. Named 60/-, 70/-, or 80/- (60, 70, or 80 shilling) for the price of a cask back in the 19th century – not the tax as is often said. The shilling names came into vogue only since 1970.

60/- ("Light") is really a Dark Mild Ale that is even less alcoholic and might be a bit more hopped. Usually found only in Scotland and in Cask Conditioned form. 70/- ("Heavy") is a lighter colored beer that would best correspond to a British Pale Ale. 80/- ("Export") is a darker, sweeter version that is really more of each than an British ESB. It is mainly produced in bottled form. It could be considered the IPA of Scottish Ales as it was formulated to be sent out of country to the US, England, and the European continent. Still, it isn’t as strong nor does it use as much hops as a British IPA. Historically there have been 50/- ales (Brakspear’s) and numbers as high as 160/- (Younger’s) back in the 1800s.

60/- | OG: 1030 – 1035 | FG: 1010-1015 | ABV: 2.5-3.5 | IBU: 10-20 | SRM: 10-18 70/- | OG: 1035 – 1040 | FG: 1010-1015 | ABV: 3.2-3.9 | IBU: 10-25 | SRM: 8-16 80/- | OG: 1040 – 1050 | FG: 1010-1015 | ABV: 4.0-5.0 | IBU: 15-30 | SRM: 10-25 Scottish ales are marketed much truer to style and with less of the confusing overlap than British Pale Ales. Note that Scottish Ales made in North America are usually of the 70/- or 80/- variety and, while generally brewed to style, quite often have a higher ABV due to a higher attenuation (lower FG). Native Territory: Scottish Lowlands. Color (SRM): See table above. Copper to distinct reddish amber. The darker color of 60/- beers is not representative of the strength. (8 – 25). Head: Small white or ivory head. Usually quite thin in cask conditioned form. Aromas: Caramel maltiness. Light roasted or smoked notes. Sometimes a peaty aroma is achieved or maybe it’s just perceived by romantic drinkers. Flavors: Malt that has a slight caramel sweetness. Earthy or bready notes. Finish: Most have a bitter dryness. Mouthfeel: Medium body with often some graininess. Bottled versions are usually fairly light. Carbonation: Quite low. Cask Conditioned forms use no CO2. Alcohol: Not noticeable in the mouth. 2.5 – 5.0% ABV. Bitterness (IBU): All have fairly low hopping but adequate for balance. (10-30) Serving: Pint or half-pint English straight-side glass or handled mug. Serve cool, rather than room temperature – 45°F or a bit less. Malts: Pale Malt. Unmalted roasted barley. "Kettle carmelization" is sometimes done to give a sweetness and color to the beer – this is done through an extended boil that cooks the wort. They rarely use any Caramel Malt. No self-respecting Scottish brewer would use sugar or other adjuncts. Hops: East Kent Goldings. Fuggles. Yeast: Normally a special strain of yeast that has low alcohol attenuation but thrives at cooler temperatures. Lacking that, British Ale Yeast is a substitute outside of Scotland. Related Styles: Southern Brown Ale, British Pale Ale Notes: Any peaty character usually comes from the water rather than the use of any peat-smoked malt. Bob’s Pick

There are many cask conditioned versions brewed in Scotland; too many to even note here. Widely Available 60/-

Caledonian 80/- – Edinburgh megabrewery (Caledonian, part of Scottish & Newcastle) – The cask conditioned version is a regular in many Scottish pubs. Dark red color. Long-lasting off-white head. Biscuity and earthy. 4.1% McEwan’s Export Ale – Edinburgh megabrewery (Caledonian, part of Scottish & Newcastle) – Probably the largest production of bottled 80/- although only sporadically seen in the US. Lighter in color and character than most. Some sweet butterscotch and bitter coffee notes. Three Floyds Robert the Bruce – Munster, IN regional brewery – Not overly thick but quite strong. Roasted and caramel notes come through. 6.5% 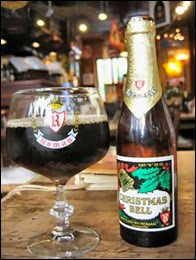 If Scottish ales are comparable to British Pale Ales, then Scotch Ales are the Scot’s equivalent of an Old Ale. Just right for a fireplace and a copy of Burns’ poetry. Popularly known as Wee Heavy and sometimes labeled 90/- (90 shilling) or even 120/-. They have a roasted, earthy quality. This style is an adopted darling in Belgium where some of the very best examples can be found. They tend toward bigger, roastier, and smoother than the typical from Scotland. A sub-style is produced as a Christmas ale that often uses a lot of roasted barley and some toasted malt to give more smoky notes and a darker color. A long boil time accents this malt. Sweetness is also enhanced by the use of candy sugar in the wort in Belgium. Native Territory: Scottish Lowlands. Color (SRM): Dark amber to dark brown. Color influenced by roasted barley. (15 – 25). Head: White or ivory head. The best give Belgian lacing. Aromas: Malt predominates. Smoke and peat may come through. Flavors: Coarse malt, again from roasted barley. Caramel sweetness. Finish: Long an biting. Alcohol comes through and stays in the mouth. Mouthfeel: Medium to chewy. Carbonation: Very low. Alcohol: 6.0 – 10.0% ABV. Bitterness (IBU): Only to prevent extreme sweetness. (20 – 35 IBU). Serving: Usually served in half-pint or .25 liter stemmed glass. The Thistle-shaped stemmed glass from Gordon is an absolute classic. Serve at almost room temperature – 55°F or so. Malts: Pale Malt. Roasted malt or unmalted roasted barley is usually included – 3% is not untypical. "Kettle carmelization" is sometimes done to give a sweetness and color to the beer – they rarely use any Caramel Malt. Hops: East Kent Goldings are typical. Yeast: Normally a special strain of yeast that has low alcohol attenuation but thrives at cooler temperatures. Lacking that, British Ale Yeast is a substitute outside of Scotland. Related Styles: Scottish Ale – Similar grains, yeast, brewing technique. Old Ale – the English cousin. Bob’s Pick