On the last Friday of the month in May, with the skies cloudy showing promise of more rain, local breweries, beer drinkers, historical lovers and more gathered at Conner Prairie to enjoy another year of History on Tap. 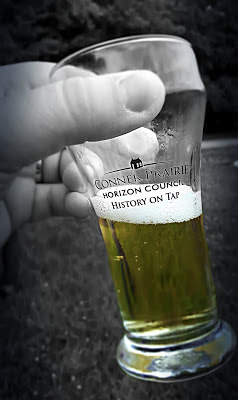 Brought together by the Conner Prairie Horizon Council, History on Tap involves much more than a simple beer festival. Opening up the entire grounds for attendees, breweries and one local meadery scattered about ready and willing to pour endless samples for tastings and full half pints in exchange for tickets.
Not only was there delicious beer, but a food buffet was available. You could partake as part of your VIP ticket or it could be purchased separately. A grill and other food vendors provided for those wanting a snack. There was also music,  reenactments throughout the park and a brewers panel in the barn. 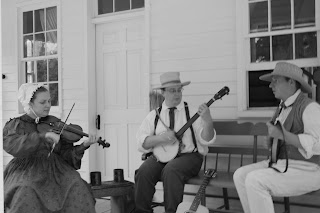 The timing of the event couldn’t have been more perfect. Spanning 4 hours (4 1/2 if you were VIP) into a Friday night, is the perfect way to spend the kick off to anyone’s weekend. Plus with the night weather, and it being late spring, it kept attendees nice and cool.

But enough about atmosphere – let’s talk about beer!
I had a sample from every single participant that night. Some were old favorites, many were regular house beers, some new ones popped by, but all were enjoyed (Some even twice!)
Instead of listing them all I’ll just mentioned the ones that stood out –
Flat 12 Bierwerks – Cucumber Kolsch – The nose of this beer is very crisp, with a clean highly cucumber-y smell, but honestly the taste isn’t for me. This beer is their new summer seasonal being bottled and will be out in stores soon. I suggest giving it a try for yourself.  The concept for this beer was a long time coming, Rob Caputo mentioned in the brewer’s panel how it started out with adding a whole cucumber to the fermentation. Later on for mass production, this was replaced with cucumber essence.
Union Brewing Company – Sassy Pants Porter – A porter with sassafras added. Was an interesting flavor. I probably should have had more of it. It was definitely good, but one of those tastes where you can’t put your finger onto why it tastes good. .
Bier Brewery – Farmgal – Ok, so this one is a cheat. I love Farmgal. I love the slight sweetness, the slight spice, the easy drink-ability. Of course it is a saison, which is one of my favorite styles and from Bier one of my local favorites. 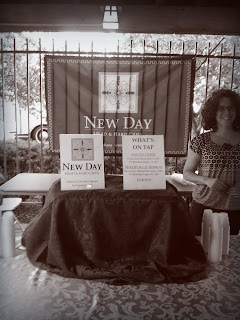 New Day Meadery – Shelby Blue Ribbon – a wonderfully balanced mead with strawberries and rhubarb.  To be honest, I can’t think of anything that isn’t wonderful from New Day, – meads or ciders.
Cutters Brewing Company – Belgian Pale Ale – Not as smooth as Goose Island Matlida, which is mostly my base comparison to Belgian PA’s, but still refreshing.
Fountain Square Brewing – Brought their house beers, but I really appreciated the well executed Workingman’s Pilsner.
As for some other attendees thoughts? – I heard a lot about New Day’s Shelby Blue Ribbon and from two of DoItIndy’s finest – Ben Risinger loved Flat 12’s Cucumber Kolsch while his soon to be wife, Kelly loved Cutters Brewing Company – Scottish Ale & as always Thr3e Wise Men’s – Two Lucy’s Blackberry Wheat.
Without a doubt, History on Tap is a great event to attend.  They doubled in size this year, and look to double again next. Get tickets early. I got my VIP ticket for $28, which is unlimited sampling, three full pours, 30 minutes extra, plus includes the buffet!

Hope to see you there next year!