Editor’s Note: Various circumstances prevented our reporters from attending this event. The good (arguably better) news is we were able to line up a guest review from Andrew Korty. Andrew is a BJCP National-ranking beer judge, National Homebrew Competition medalist, and all-around swell guy. Big thanks to Andrew, check out his review that follows….. As craft beer popularity continues to grow, festival-goers are haunted by the specters of overcrowding and high-priced or unobtainable tickets.  One hope for satisfying this demand is smaller, style-oriented festivals.  How fortunate that one of the first of these in our area focuses on perhaps the most challenging and beer-geeky of styles — sour ales. Upland’s Sour + Wild + Funk festival featured over 30 sour ales with suggested cheese, fruit, and meat pairings which could be sampled from several large spreads on each end of the venue.  An aural backdrop of funk and related music set the mood, and if you and your colleagues wanted to discuss the finer points of B. bruxellensis versus B. lambicus, you could step out into the quieter outdoor area. Upland’s own Sour Reserve was the clear standout and the only beer of the evening with that braying, horse-gone-strange character you’d expect from the finest Cantillon Geueze.  Other highlights were Sun King’s surreally complex Stupid Sexy Flanders, a Bretted Pilsener from Brugge Brasserie, Saint Somewhere’s Lectio Devina, New Belgium’s Bier de Mars, Barley Island’s Damien (although not a sour, a nice Belgian Golden Strong) and of course Goose Island’s fruited wild ales Lolita and Juliet. Jolly Pumpkin and Saint Somewhere beers were available courtesy of Starlight Distribution.  These are the folks that took over the Shelton Brothers lineup from Cavalier, and they’re a high-energy bunch.  Thanks to them for making some of the most interesting brands available in Indiana. Although the number of beers was small at this festival, it was nice having plenty of time to sample them all.  The food pairings were better than I’d have imagined, both in variety and quality.  On the downside, a couple of the exhibitors left as early as 4:30, apparently having run out of beer.  Seating was lacking — altogether lacking, in fact.  But apart from these minor miscalculations, this event was a wild success. 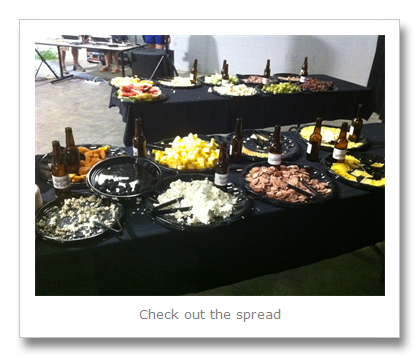 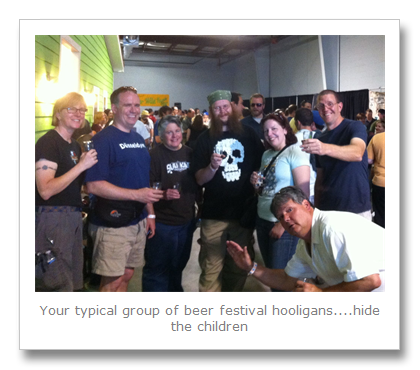