Lots of lactic lactose and plenty of oatmeal gives a big, chewy body. Gobs of hops overcome the sweetness but it’s a battle – hops win in a 2 out of 3 cage match. There’s a touch of roast, a hint of toast, and a breath of bittersweet chocolate. Still, the lactic character builds though a long finish. A couple dozen of the Barnhart’s friends and family were at the tapping – coming from as far away as Wisconsin. Larry brought the recipe which shows 16% of the grain is oats and 8% milk sugar. Uses Scottish Ale yeast. 1060, 25 IBU from Fuggles. An outstanding 282 calories per pint. 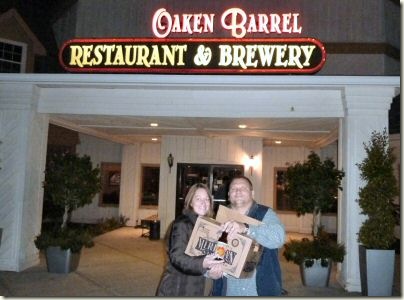 Oaken Barrel‘s Apple Buzz is all gone. 28 barrels went out including 30 cases of 6-packs were sold from the reception stand in 4 days. Big cloudy brass color with an active white wheat rocky but compact head. Made with malt, ciderf rom Adrian Orchards, clove, and honey from Who’s Your Honey to a recipe from Ken Price back in, we think, 2003. Tart cider, sweet malt, honey notes. 7%. As always, A++. But it’s gone. Mike and Jen Wolcott are shown here walking out of the brewery with the last case. Sob. Mark’s Pum-Kwan Ale that won the State Fair Best of Show in the Professional division is mellowing for an October 31st release at Oaken Barrel’s Pumpkin Festival, Noon-3pm.