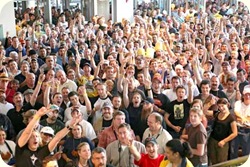 Interested in attending a beer festival in the next four months? We’ve assembled a list of options to help you determine the best use of your beer sampling dollar. If you can’t decide on the best option, why not try them all? Then send me your autograph.

Featuring more than 50 styles of sour and wild ales, the second annual Sour + Wild + Funk Fest promises to be another unique celebration of this emerging trend in craft beer. The beers served as this event are paired with foods designed to accentuate their unique flavors. VIP tickets are sold out, but general admission were still available at the time of this posting. To get a better feel for the event, check out IndianaBeer guest writer Andrew Korty’s review. 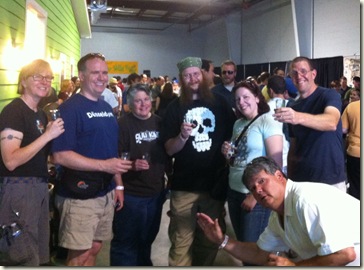 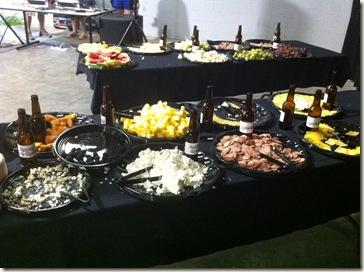 The inaugural American Beer Classic is a major regional event that showcases hundreds of diverse brewers for beer lovers on the grass of Chicago’s Soldier Field. The event covers two separate sessions over the course of Saturday, May 11th and includes live music and educational sessions. VIP tickets include complementary tours of the Visitor’s Locker Rooms, the Skyline Suites, and the Colonnades. Attendees will also have the opportunity to vote in the People’s Choice competition to determine the favorite beer of the festival. Note: General Admission tickets increase to $60 after May 6th.

Set around Conner Prairie, History on Tap features 10 central Indiana breweries, along with New Day Meadery. There is a panel discussion on Brewer Innovation along with a brewing demonstration from Tuxedo Park Brewers. Imagine an adult version of Conner Prairie at night. Great beers, great chances to talk to the brewers, and learn more about craft beer. For a limited time, you can get 20% off with the discount code “HORIZONFRIEND”. VIP tickets are already sold out, but you can still get Early Bird General Admission tickets until May 20th. Tickets increase $10 after that date.

The 8th Annual Keg Liquors Fest of Ale is a charity beer festival to help raise funds for the WHAS Crusade for Children. The event features 40+ Breweries, 3 Beer Distributors, 5 Fine Wine Distributors, over 150 craft and import beers, wine, food, charity silent auction and raffle and more! The 2012 event raised over $9200 for the Crusade for Children, so head out and help them make this year even better.

So you’ve probably already gone out of your way to visit Jungle Jim’s just north of Cincinnati to stock up on bottled treasures from the likes of Alesmith, Great Lakes, Green Flash, Lagunitas, Oskar Blues, and Troegs. Why not combine your next Ohio beer run with a festival? Jungle Jim’s Beer Fest will offer 350 beers from 100 different breweries. There will be brew masters available for conversatin’ and some special firkin and rare beer offerings. A complementary picnic style meal is included with the price of every ticket. If you enjoy a good cigar with your beer, Jungle Jim’s cigar expert will be selling a selection of their world class cigars that you can take out on the terrace with your beer sample.

March Madness style voting, blind taste testing, raffle prizes, good beer, all for a good cause. Brew Bracket brings the Pale Ale style to the next version of their game. Sixteen breweries in a showdown for the best beer, all determined by your votes! Back at the Indiana State Fairgrounds, this event is 4 hours of fun and trying new inventive brews. A VIP session has been added that gets participants in an hour early for a special sampling and Q&A session with Brew Bracket multi-winning brewer Andrew Castner of the RAM along with Barley Island. For a better idea of what to expect, Indiana Beer visited December’s AMBERgeddon Brew Bracket event. A portion of the proceeds benefit People for Urban Progress. 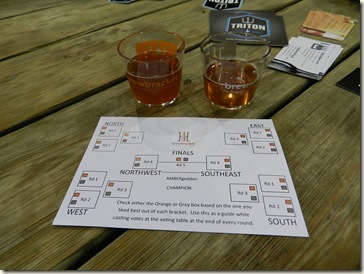 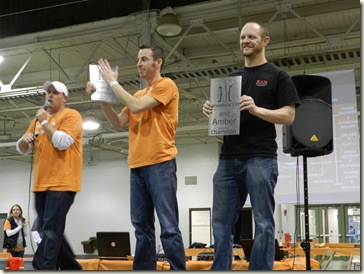 The second annual Fishers on Tap is presented by The Rotary Club of Fishers. The Rotary Club is promising 15-20 local breweries, live music from Dear Abby and the Bad Advice and Soul Street, and cuisine from select food trucks. Tickets are limited to 200 VIP and 800 General Admission. VIP ticket holders receive early entry to the festival and food pairings with local eateries and select breweries. All proceeds from the event will be distributed back to the local community to those in need through local service agencies.

Indy’s original microbrew festival returns for its 18th year of benefiting the Phoenix Theater. North Park Avenue will be blocked off to traffic between Mass Ave. and East St. Clair St. and the festival will provide a summer outdoor block party. The festival already has 18 confirmed breweries and wineries and should eventually have over 25, making this one of the best festival deals of the summer. Confirmed breweries include Bell’s, Bloomington Brewing, Brugge Brasserie, Flat 12, Fountain Square, New Albanian, The RAM, Rock Bottom, Upland, and many more! Live entertainment is provided, and food from local vendors will be available. Note: General Admission tickets increase to $35 day of event.

This has not been officially announced, but we have it on pretty good authority the 18th annual Indiana Microbrewers Festival will return to the Optimist Park and Indianapolis Art Center grounds on July 20th. If you’ve never attended, this is Indiana’s largest outdoor festival where you can sample the greatest variety of beer (don’t try them all!). The recent expansion to the Indianapolis Art Center grounds offers the chance to find a little shade and makes it easier to move around then most festivals of this size. Some pictures and a quick recap of last year’s festival are available here. That event featured over 300 beers from 64 breweries, can it be topped this year? 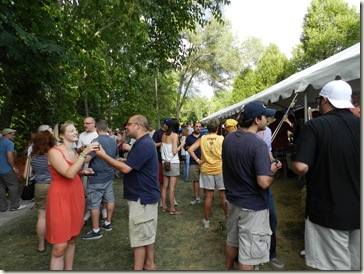 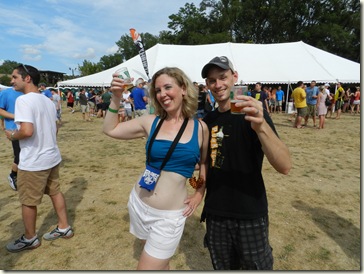 It’s a bit of a drive, but what better reason is there to head up to Michigan in July? Put on by the Michigan Brewers Guild, the Summer Beer Festival boasts over 600 different beers from more than 65 Michigan craft breweries. That number is not an exaggeration – Dark Horse Brewing alone offered 51 different beers last year. Try the Friday session if your schedule is flexible, the lines can get a little intense on Saturday. For more details, check out Nathan’s review of last year’s event. Tickets went on sale May 1st and will go quickly, so make your plans now! 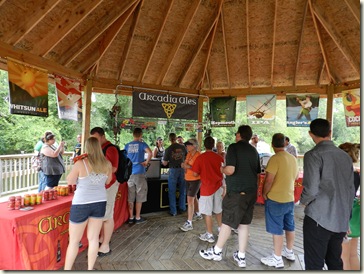 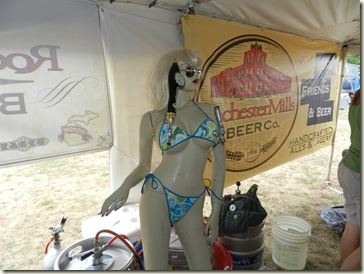 Set in the rustic hills of Brown County, GnawBrew combines breweries with artists and musicians for a fun filled, yet family friendly event. This year’s participating breweries include Big Woods, Hawcreek Brewing, HWY50 Brew House, Powerhouse, and Zwanzigz. Festival gates will open at 11am with music starting at noon. Beer samples will be served all day and well into the evening and complimentary primitive tent camping is being provided after the event by eXplore Brown County to encourage alcohol safety. So bring a tent and stay the night!

Northeast Indiana’s premiere craft beer festival promises to be even bigger and better this year with 3 tents and a 20-tap semi trailer. The price of admission includes samples from 50+ breweries, local and regional homebrewers, bottled water, and a meal! The VIP package also includes one hour early entry, commemorative t-shirt, and a special gift. Designated drivers also get a meal along with unlimited soft drinks. Check out Cindy’s recap of last year’s event. Tickets go on sale May 31st and Trion Tavern will celebrate with a Ticket Release Party featuring special tappings and pricing. Note: VIP and General Admission ticket prices increase $10 day of event. 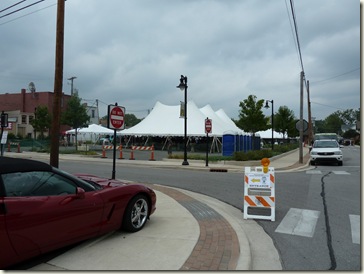 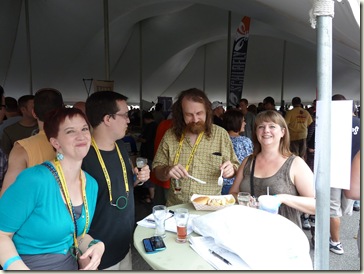 Looking to attend Victory Field for an adults-only event? The Festiv-Ale is a fundraiser for the Cystic Fibrosis Foundation featuring 30 Indy restaurants, 100 beers, and 100 wines. The VIP reception will include an educational tasting.

Details were very limited at publishing time, but it appears that August 24th will bring us the 2nd Annual Beers Across the Wabash on the John Myers Pedestrian Bridge overlooking the Wabash River between Lafayette and West Lafayette. Mark your calendars and stay tuned for further details. Until then, you can get an idea of what to expect from Jason’s review of last year’s inaugural event. 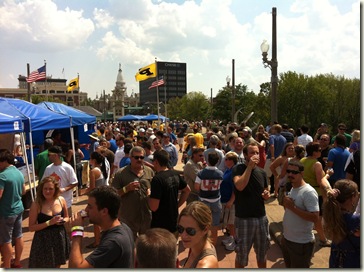 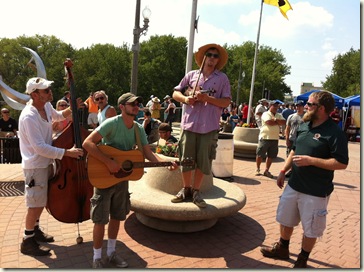 That covers everything we can confirm at the time of publishing. There will certainly be a number of other festivals that will emerge throughout the season for your beer drinking pleasure. Thanks for reading and remember to follow us on Facebook and Twitter for the latest updates. Stay safe and enjoy the festivals!