A while ago I had written a story about what drives me to go out and try the new beer from all these new breweries popping up left and right in Indiana. In my blog I mentioned how at this point I was more likely to go out to a brewery boasting something different, generally a twist on an already solid beer instead of just going for the same styles over and over again.

What is the relevance to Bloomington Craft Beer Festival? A lot and at the same time not much. Festival time though is generally the time where breweries who usually play it same crank it up a notch. Some breweries do special beer tappings (which in bigger festivals generally make some beer drinkers upset if they can’t cut through the crowd to try a special beer). Some breweries pick a theme for their beer offerings (I’m looking at you Flat 12 Bierwerks). Some breweries have some of their house beers but also bring some twists or outrageous beers.  I was pleasantly surprised and delightfully happy that this year’s Bloomington Craft Beer Festival offerings were exactly what I was looking for.

First off..having a festival in Bloomington in April is amazing. The weather is perfect, the location is awesome. (Who can argue with an old mill as the festival backdrop), and the festival is smaller, more quaint and also gives attendees the ability to try more beer and get more bang for the buck.  However,  I think it has already started to get a little snug in the Woolery Mill this year with a sold out crowd of 3,000.  Unless you are good at snaking through crowds, being a little tough to get to your next beer, or don’t mind being pushed around then by all means come back for the 5th annual BCBF.  This year did offer a little more as far as a grander musical stage, more accommodations and a “dining hall” up the hill for beer drinkers to rest and enjoy local food fair.

But enough about the layout and crowds.. I mentioned how the offerings were what I was looking for, so let me get to the important part of this piece – the beer.

Right out of the gate, I bee lined to Zwanzigs Scorpion Pepper Imperial Stout. 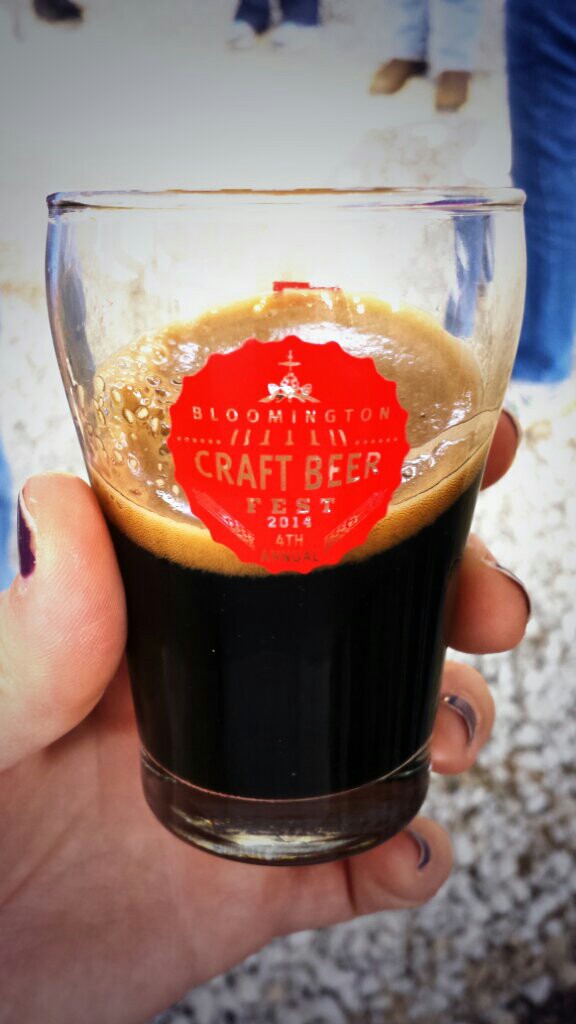 Taking a step away from the Ghost Pepper Infused Imperial Stout that Zwanzigs used to offer, this beer was still exactly what I was looking for. A chocolate, robust start and a slow tickle in the back of my throat burn.  The first offering was just a little to see if I actually would like it, but after quickly swallowing it down I asked for more, plus they had a small batch of it set aside to “kick it up” a notch. I, of course, had that added.  I was almost scared that it would cause a flame to shoot out my mouth, but was back to just having a pleasant burn, a bit more noticeable than the first time, but still just a nice pleasant beer.

From there I stepped down the row, my eyes in search of unique beers and Broadripple Brewpub did not disappoint. Their Cinnamon Roll Porter, could have been a great breakfast beer, if I drank beer at 8am.  The cinnamon flavor was just a slight, but there was definitely a creaminess that gave the drinker a mind set of licking icing off a Cinnabon roll.

Before my next crazy beer I did have a few interesting solid beers.  18th Street Brewery’s Bitch Hands Pale Ale was a strong beer, that I would definitely drink more off, not just to say I was drinking Bitch Hands either (which brings up another thought I had during the festival off how crazy beer names are getting).  Choss – A triple IPA from Figure 8 was another solid good beer, that actually gave me a pop of taste as it hit the back of my tongue. It wasn’t something that made my head turn like the beer was made unusually, the pop seemed to come naturally from the basic ingredients used for this beer . 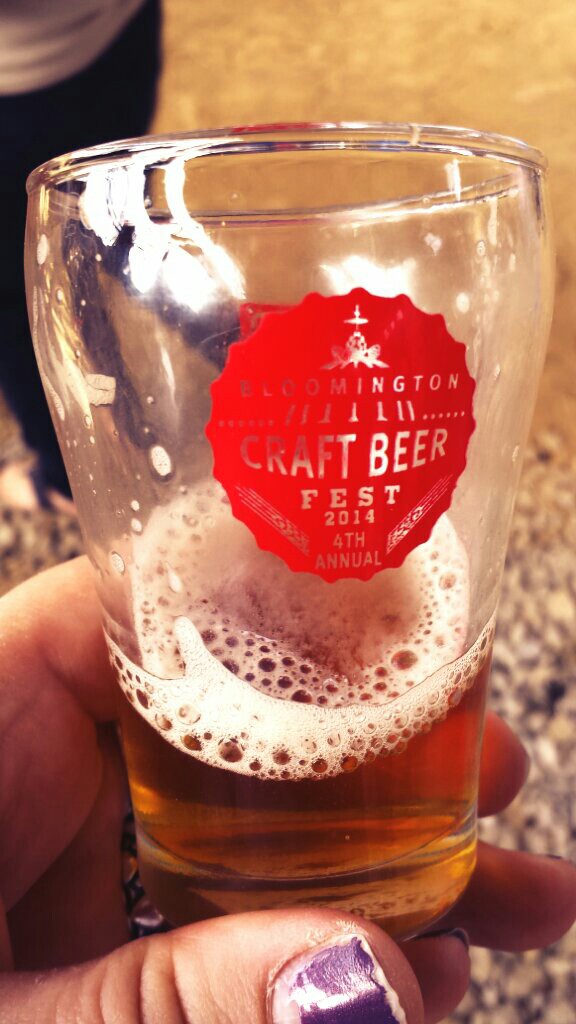 Back to the crazy, (again looking at you Flat 12). Sidetrack – Flat 12 never disappoints me. Honestly, even if I may not like some of their crazy beers, <cough> Cucumber Kolsch, </cough>, they take the risk, they combine, they go crazy and almost all the time they hit their mark.  CC3, aka a Cotton Candy flavored Belgian Style Trippel was really great. It smelled like Cotton Candy, it tasted like Cotton Candy, I almost wish it was pink like Cotton Candy. I tried a sip of my friends Caramel Corn flavored beer for their table as well, it was sweet like caramel with that corn twinge.  If I wasn’t on a mission to cover as many tables as I could for IB.com I would’ve tried all the beers at Flat 12. I’m hoping CC3 makes a comeback in the taproom. I know it won’t be at another festival. Flat 12 keeps up with a theme per festival and so far hasn’t repeated many of their festival beers at other festivals I’ve been able to attend.

My last special call out of beers has to be Crown Brewing’s The Dude White Russian Java Porter.  The Dude definitely abides with this beer. I could almost hear the ice clink in the glass drinking cream, Kahlua and vodka with each sip of this beer.

Besides being happy with finding these special diamonds in the beer festival rough, I was also happy to find good solid beers. Makes me rethink my intro of only popping into breweries that are pulling beer stunts.  Lafayette Brewing gets a shout out for their Star City Bock. I was definitely fan of this clean,slightly caramelized beer.  Salt Creek also deserves some love for the cream ale.  The biggest applause however goes to the homebrewing club, the Bloomington Hop Jockeys. I love their Berliner Weisse, the sour blonde and I did make it over the tapping of the sour stout.  Their Berliner Weisse opened my eyes to a new style of beer that may rise above regular sours as my favorite. the BHJ Berliner Weisse and later Desthil Brewing’s Berliner Weisse were my ideal summer kind of beers. Tart, sour and shocking.

All this love for beers.. I bet you are wondering, did I love them all? No, of course not. There were some beers that just didn’t cut it for me. One sip and the rest ended in beer blasphemy by hitting the rocks of the “floor” of the Woolery Mill.  I’m not one for knocking a brewery’s beer down cause it could be an amazing beer for someone else, but I will say there was a new brewery’s IPA that I was just not a fan of at all, it was flat and flavorless.  Another brewery’s wheat ale was just about the same.   It could have been the location or the beer travel. I had a sample of a black ale that I had tried in the pub recently and it didn’t taste nearly the same chocolately, slight tilt of sour that it did when I a pint of it a few weeks back.

Overall, the BCBF was a lovely festival. I hope that the 5th year sees an expansion of the layout so people can walk around easily without almost crowd surfing for beer. I also hope more breweries from the north come back down. I missed seeing Iechyd Da Brewing and Bare Hands Brewery.  I hope they either come down and join the southern fun or that centralized northern festival is in the works. Until then, I look forward to the Microbrewer’s Festival in July and other great times come forward as the great weather festival events start off.

Hope to see you around! 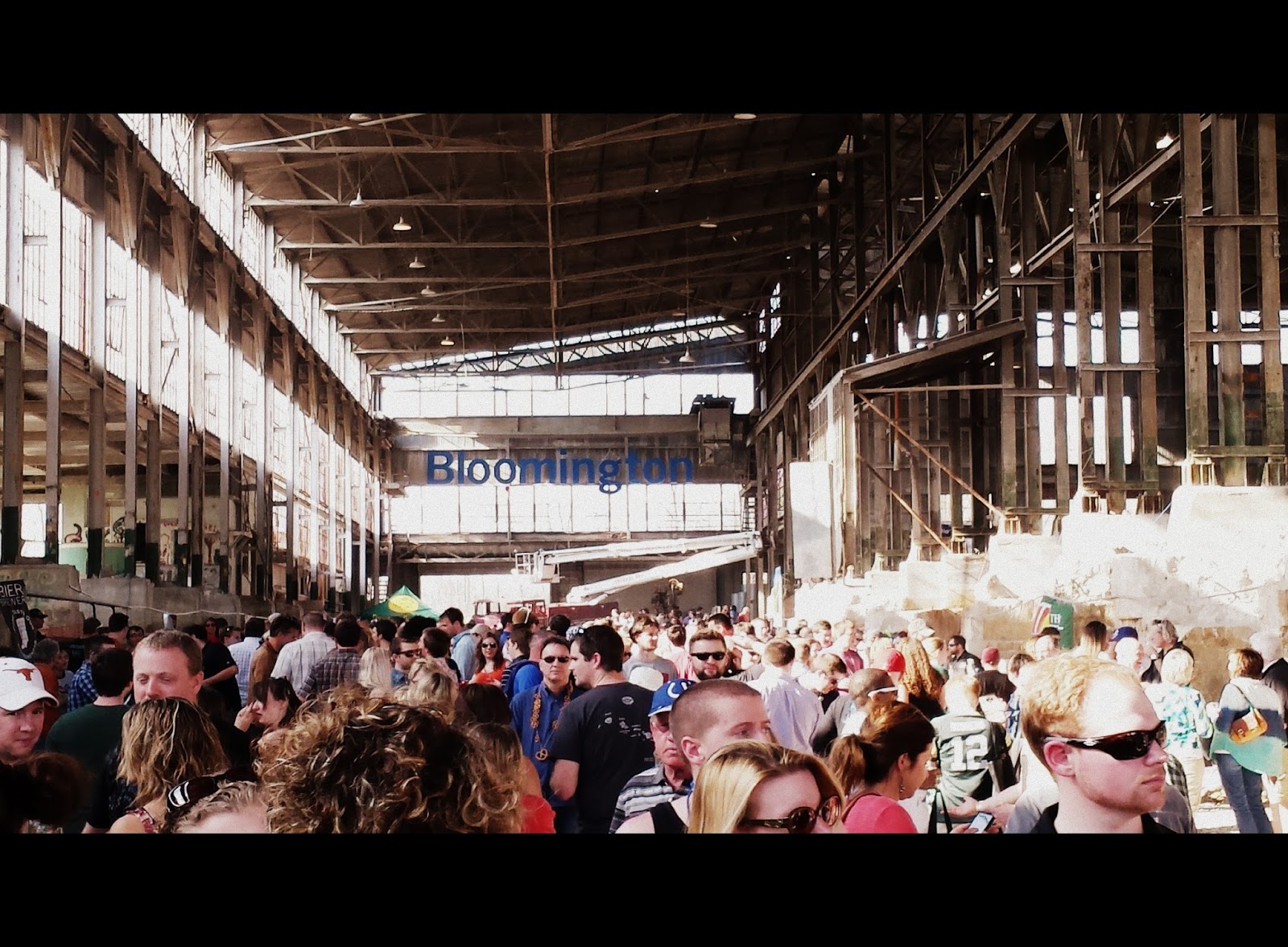