The Glazed Ham Porter (yes, it is beer) has been back at Flat12 Bierwerks, Indy, (web site here) along with 11 of its closest Holiday ‘friend’ beers. This year I tasted 7 of the 12 and got good reports from regulars on the others. The Glazed Ham Porter has sweetness that layers into the porter. This is a ‘love it or not so much…’ beer and is one the regulars look forward to each year. 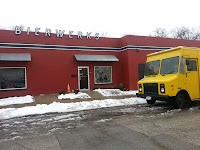 Other varieties include(d) the Brandy Barrel Walk-About Pale (tapped12/13) which is very balanced between the sweetness and hops; so balanced that a hop lover visiting Flat12 said it would not be his favorite while his lady who likes hops less really enjoyed it. Juniper predominated the Juniper IPA (tapped 12/14) which was made with crushed juniper with the flagship HalfCycle IPA base. The SnickerDoodle Blond (tapped 12/15) was another addition with cinnamon and lactose making it taste incredibly like the popular cookie. 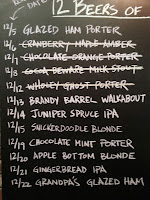 The Chocolate Mint Porter (tapped 12/19) featured cocoa nibs and house-grown fresh mint while the crazy Cocoa Beware Milk Stout (tapped 12/8) was incredible with Dutch cocoa, Ovaltine brand chocolate, and marshmallow fluff – it’s a good things kids can’t get to this one! One that I missed but heard fabulous reports on was Wholey Ghost Porter (tapped 12/12, keg blown 12/13) Mexican coffee + ghost chilies! I also missed the Cranberry Maple Amber (12/6) and Chocolate Orange Porter (12/7) but have had Head Brewer Rob’s maple concoctions before and can imagine how good chocolate with orange would be in porter.

Coming up are the Apple Bottom Blonde (12/20), the Gingerbread IPA(12/21) and the finale on 12/22 is a delicious bourbon barrel aged, spiced, plus vanilla beans added Grandpa’s Glazed Ham Porter (12/22). From the sample Rob grabbed me, Grandpa’s delivered notes of every flavor from the extra vanilla with oakiness to the richness of the porter so can be highly recommended.

And for another Twelve Beers of Christmas, Check out Kathleen’s previous BLOG here

Flat12 hosts its third anniversary on January 4, with special beers! Brewer Rob Caputo promises yet another crazy theme at their booth and with their beer for Winterfest Beer Festival on February 1, http://www.brewersofindianaguild.com/events/details/winterfest-2014 with 12 not sampled before beers. And look for new ideas in 2014 such as some firkin tappings!