Thr3e Wise Men Brewing Co., with restaurant brewery in Broad Ripple and with beer flowing in Scotty’s BrewHouse restaurants around Indiana, has one of Indiana’s more experienced professional brewers. Omar Castrellon was a backbone of the downtown Indy brewing scene for 8 years at the former Alcatraz brewery. He now has clearly shown Indiana what he and great brew staff like Keely Thomlinson can do in quality and award winning beers since moving to Thr3e Wise Men. If we can count and drink beer, Thr3e Wise Men won five awards at the Indiana State Fair Brewers Cup in 2013.
We visited Thr3e Wise Men on a couple of different afternoons over the past few weeks chatting with Omar briefly each time. You can take a quick brewery tour with Omar using the YouTube Video below (courtesy of Scotty’s/Thr3e Wise Men & YouTube)

The Thr3e Wise Men Brewing Co. keeps a beer on a hand pull and a few weeks ago we found the 4 bean vanilla porter on the pull. It delivered complex vanilla with a lot of sweetness in a nice porter, perfect delivered this way. The next time we visited we found an American Wheat with Lemongrass to be a delightful beer without what I call the grain taste of some wheats but a nice ‘spice.’ Lemongrass delivers flavor of lemon without the bitterness. Other Seasonals Tasty Waves California common was the July seasonal still available in September with wonderful malt and caramel characteristics coming in at 5.5% alcohol and 38 ibu for a nice little bitterness at the end. 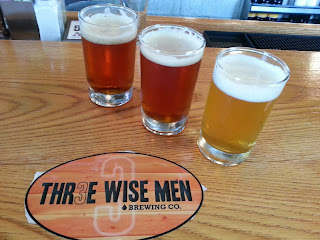 The September seasonal is the Antonius 1742 Oktoberfest – a 2013 Indiana State Fair Brewers Cup Gold Medal winner. We had a sample and found it a very solid beer. If you can find fresh Oktoberfest on tap at a Scotty’s near you or at the Brewing Co. restaurant in Broad Ripple treat yourself.

As for the regular pours, the Bulldog Brown has become one of my favorites as I believe the crystal and kiln coffee malt shine through for a nice rich but not overpowering flavor. As a silver medalist at the 2013 Brewers Cup it is apparent others love this beer, too! We have written about the Two Lucy’s Blackberry Wheat from beer fests before, but as usual we had not focused on the blonde, beer that is. The blond offering at some brew pubs is a light beer designed to satisfy the yellow-fizzy corporate beer drinker in search of FizzyLite. This Thr3e Wise Men Snow Bunny Blonde is a delicious beer with a lot of flavor provided by the German spalter hops, giving it 16 ibu but a lot of taste . The Rocky Ripple Pale is a solid offering which we chose as the beer to walk around the grounds of the Penrod Arts Fair a couple of weeks ago (See Story Here) If you love hops, the Centennial Martyr Double IPA with 98 ibu will likely be your choice.

Ask anyone who knows the Indy beer scene about the earliest brew pubs and they will point you to Broad Ripple Brew Pub. We caught up with current BRBP Head Brewer, John Treeter along with author Rita Kohn, the day after this monumental brew day. Kohn, has just released her latest book, The Complete Idiot’s Guide to Beer Tasting

This #2500 new beer which should be coming into the tapped line-up within a few weeks is a double IPA. The beer should have a lot of citrus dimensions.

Treeter shared a Tart Lizzie, a very flavorful and only slightly sour fruit beer that was almost palate cleansing. The Tin Lizzie was an homage to the current Queen Elizabeth of England of which we think she would be proud. This not-quite-puckering offering was brewed with the assistance of nearby Brugge Brasserie owner, Ted Miller, who has sour beer expertise for Brugge.

That has since been replaced on tap with a very smooth Scottish on Nitro! This low alcohol beer gives you a nice smooth session beer at 4%! You will also find their crisp Oktoberfest lager style for the season.

The Pub, as it is affectionately known by locals, ties into local events and will be having a Tales & Ales event September 26, 6-9 PM where patrons meet local dogs rescued from animal control and ready for adoption.