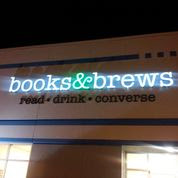 Books and Brews – a bookstore and brew pub located North between Castleton and Fishers is a nice little up
and coming place for any book lovers and explorers of beer. A used bookstore in the front, it offers a
small quaint feel when you come in. All the bookshelves and rest of the furniture are handmade, along
with the beer brewed on site. If you are looking for a place to gather, read, play games, listen to music
or participate in trivia on the north side, this is a great little place to go.

Kathleen stopped in on a Saturday night of their grand opening to try out their beer. Kathleen and a friend each got a half pint. Hers was the English Ale which, as traditional English ales go, was a
little cold, flat like but goes down smoothly. The friend had the breakfast ale. It had a little bit of a
roasted chocolate mouth feel, also smooth to drink. Overall they were okay ales. 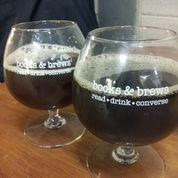 We look forward to seeing how with time, these beers could get a little more flavorful or trying some of the other ales that are
available.

The brewery part of Books and Brews is a small run of tables with a bar on the side. They offer a good
run of activities throughout the week along with food for customers as well. Overall the concept of a
bookstore brewery, the fact that this all began as a kickstarter project, and the handmade – hardwork
seen throughout is a good reason to visit, and try out one of Indianapolis’ newest breweries. Books & Brews is at 9402 Uptown Drive Suite 1400, Indianapolis, IN and is open M-TH 11AM-9PM, FRI 11AM-10PM, SAT 10AM-10PM, SUN 12-6PM 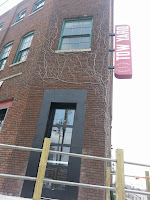 Tow Yard Brewing brings an Indiana brewer home to share his ‘beer as food’ attitude from the Pacific Northwest. Bradley Zimmerman grew up in Central Indiana getting both his college and high school education yet got his beer schooling in the hotbed of Seattle. Zimmerman worked first at Elysian Brewing in Seattle, a brewery started by Dick Cantwell from Big Time Brewing. Bradley then moved to Big Time Brewing, one of the original craft breweries in the U.S., getting great experience with a great list such as the regular Pale, Amber, Porter and IPA as well as a huge range of specialty beers. GregKitz was able to swing by there and also caught up with Bradley.

Bradley told us he particularly liked hanging out at Brouwer’s Cafe in Seattle, one of the top Seattle beer bars with 64 craft and Euro draft lines + 300 bottles. There he fine-tuned his appreciation for Belgian beers, barleywines and Imperial Stouts while always loving a solid IPA.

This brewer says we should expect not only a golden ale with Maris Otter base malt and an IPA but eventually a saison, a stout and some other Belgian beers to follow his taste. The brew system will be fired up this next week and they will get some experience with it before expanding beyond primarily guest beers on tap. There is a 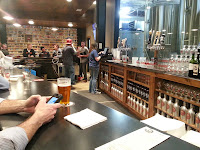 pilot batch of the golden ale and an IPA on tap now, though expect those to change when they come from the brewery system. Currently available to sample is Goldie Hops golden ale displaying the wheat and the Maris Otter plus Emerald Circle IPA also with Maris Otter base malt but with 5 hops. The final version will be dry hopped and should exhibit big hop character. They have a 30BBL Mashtun. Tow Yard also blends 60/40 Goldie Hops ale with grapefruit soda to make a “Shandler” (get it Shand/Radler) as a refreshing low alcohol beverage.

Tow Yard’s brew pub is 2 1/2 blocks from Lucas Oil Stadium and five blocks from the Circle on Madison Avenue South, one block south of South Street in downtown Indy. The gorgeous remodel of the old Chateau Thomas Indy winery gives great views of the Circle City as well as plenty of view of the brewing operation. 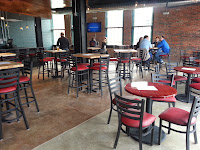 The space is partly separated into restaurant seating and a mini-bar, a bar area, and The Larder deli/restaurant with more seating, a deli case, and locally made sodas. For food expect signature sandwiches like The Pig (pork shoulder, uncured ham, Swiss and more) and Holy Schnitzel (pan-fried schnitzel with cheddar, onions & more) as well as specialty burgers, small plates and soup. Owner Jim Siegel takes a back seat as Mike DeWeese, well known in the beer world of Indy, is the Director of Distribution. 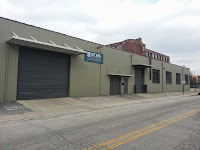 Outliers Brewing is in Phase 1 of operation with growler fills from the large brewery that is associated with Brugge, Indy. This new downtown location replaced their Terre Haute brewery. Outliers is 1 block both East and South of Mass Ave or approx. 7 blocks from the Circle at 534 E. North Street. As a point of reference you could walk about 1/2 block West from the Outliers’ door to Mass Ave and walk a block South along Mass Ave to arrive at the Athenaeum Rathskeller.

Currently Outliers has 5 of their beers on tap for growler fills or a pint on Friday 4-7PM and Sunday 12-3PM. The Whitcomb Rye is NOT a RYE-PA, but 40% Rye malt giving it the wonderful spice of rye and very low bitterness in a light golden ale, making this a very tasty and very different beer and easy to drink at 4.5%. 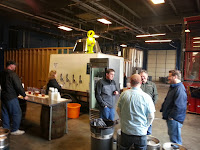 County Brown (is this an Indiana take on Ireland?) also is sessionable at only 4% with surprising chocolate notes and a nut-like flavor (no nuts were used or harmed) in a medium body but flavorful offering that delights from an English malt bill with some roasted malt using golden and fuggles hops.
Blau Machen Pils (literally, to “make blue” but refers to skipping work on Monday in German) has solid grain notes and an expected slightly bitter finish from European malt and American hops, clean and light at 5.5% alcohol.
Buffalo Jacket IPA is very balanced with smoothness from malt at the start and floral finish from Cascade at 6%.
Triple de Ripple, brewed here for Brugge as their signature beer is also available. 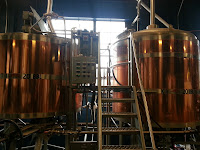 This brewery with beer out the “garage door” on North street is Phase One as construction will begin soon on the kitchen and restaurant on the North or ‘back side’ of the building (Phase Two)! Owner Ted Miller (of Brugge fame) shared with us that Outliers allows them to expand to American craft beers in addition to the Belgian style under the Brugge name as well as expand the relationship between beer and food in this downtown location. Ted hopes the restaurant will be open yet this summer! So if you think frites and mussels think Brugge, Broad Ripple. When you think American craft think Outliers. Ted is an entrepreneur who is always thinking so expect more in the future. While Ted enjoys a good strong beer or IPA he said later in the evening he has really been enjoying the Whitcomb Rye. So did Greg!

Written by Kathleen and GregKitz