Today’s tale is a happy story of choice and a sad story of having to make a choice. Yeah, I had to reread that sentence also. You see last night the Old Town Ale House with the local United Package Liquors had a "Beer School" from 6 to 8pm and just up the road the Ram‘s Fisher’s location hosted the mug-club tapping of an Irish Stout at 6:30. Choices. Especially since 116th St traffic could make the 4 mile drive into a half hour of exhaust fumes. 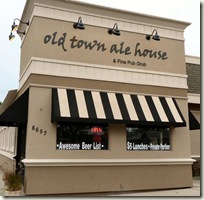 The Old Town Ale House, you see, is in downtown Fishers. 116th St just east of the railroad tracks. The decor is minimalist Michigan Roadhouse style. Plenty of space and plenty of good beer. The "Awesome Beer List" in the window is correct. You’ll find 20 taps and a menu with simple pricing. I stopped in for a late lunch/early dinner (dunch? linner?) and had an amazing thing happen. The bartendress, Precia, showed me the draft menu, pointed out the 80 or so bottles listed on the blackboard, asked me what kind of beers I liked, and had 2 samples in front of me almost before I could stammer "hello". She’s good. So’s the food. Had a grilled Tenderloin Club w/fries. The 2 big slices of caramelized bacon drove all thoughts of condiments out of my head. This is the direction BBQ should go. Caramelized Bacon. Yum.

Had to duck out just when the Beer School started. Basically reps from the 116th St United Package Liquors and Cavalier Distributing offered 10 different IPAs for sampling. Your $10 tuition also included substantial snacks. 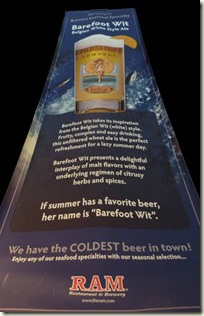 Ram’s Mug Club includes invitations to monthly tappings usually rotating between Downtown Indy and Fishers. These are gala affairs and are well-attended. Last night they offered a plate of chicken or mahi, cornbread, and wild rice for only $6 to pair with the Irish Stout bought by the brewer.

This tapping marked the change of regime from Dave/Clay to John/Adrian. The new generation has taken over with John Simmons and Adrian Ball at the helm. It looks like they’ll fill the big rubber boots left behind. The Irish Stout has plenty of roastiness and deserves time to warm to release it full and enticing bouquet of flavors. At 4% ABV this is a Session Stout that has a lightish body and will easily accompany a good steak or finish a meal. The Barefoot Wit is very bold with a big citric coriander/cilantro aroma. A Grand Cru of Wits. Color of a well-tanned California girl. You might find the aroma lacking when first served – let it warm – it’s that "We have the COLDEST beer in town!" thing. John tells us they plan three batches of Barefoot Wit and it will be on tap all summer. The new team plans to keep the Kölsch as a regular offering on the chalkboard.