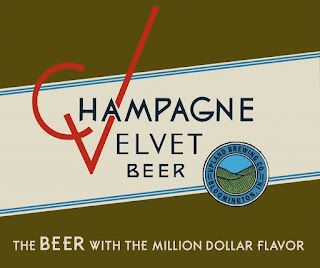 A beer brand that was once one of the more prominent brands in the United States will literally roll down the streets of its former hometown on April 6th, as a horse-drawn beer wagon delivers Upland’s Champagne Velvet, the beer with the Million Dollar flavor, to 3 notable Terre Haute pubs as Upland Brewing starts the celebration of its 15th anniversary. Just fifteen years ago Upland Brewing came to life in a small brick building near downtown Bloomington, Indiana. Yet, 109 years before the establishment of Upland, the seed of one of the nation’s great early beers was born as The Terre Haute Brewing company was formed in a brick building near downtown Terre Haute, Indiana. In 1900, before prohibition, Terre Haute Brewing was one of the largest breweries in the U.S. By 1901 to 1904 they had Champagne Velvet Brand which was eventually distributed in 48 states. (citing our own Bob Ostander, in the book “Hoosier Beer”) Indeed, Champagne Velvet, or CV as it is known by old-timers, was Indiana’s biggest and best known beer for years.

The accomplishments: Upland Brewing President, Doug Dayhoff, told us they wanted a major beer introduction for the brewery’s 15th anniversary and they were quite pleased to add the Champagne Velvet label to Upland. “We’re heading into our 15th year of operation on the heels of a massive brewery expansion, and the next few years are going to be very exciting,” said Upland’s Dayhoff. “We think the best way to celebrate the success that so many local breweries are having is by paying tribute to the most successful beer in Indiana’s history.” Quite a year it is for Upland with the revival of Champagne Velvet, a new Tap Room coming online in Carmel, IN, major expansion into Ohio and beyond, and continuing the other brewing tradition Upland has adopted as a major brewer of sours with Kiwi and Persimmon being released soon, yet this Spring.

The beer: I had a chance to taste test batches of Champagne Velvet in January and then sample a bit from the fermenter just recently. With a nod to its past at 30% corn grain the beer will be bright and modern and has been taste-tested with bartenders and consumers. This German-inspired lager uses traditional German yeast strains and Tettnang hops but will be light on the bitterness. There was a brief revival of the brand more than 10 years back by a Terre Haute entrepreneur who claims to have found a recipe from the assistant brewmaster from 1901, yet that recipe was not a complete brewing mashbill and ingredients have changed in over 100 years. The Upland Brewing Crew including Peter Batule, VP of Brewing operations, Patrick Lynch, Brewer and Matt Wisley, Asst. Brewer, went to work perfecting just the right brew to bring back the label but with an appeal to today’s beer drinker.

The arrival: The horse-drawn beer wagon will first stop at Sonka Irish Pub,1366 Wabash Ave, in Terre Haute about 3:00 PM on April 6. The parade then continues to The Copper Bar, 810 Wabash Ave, which itself originates from 1895. After the tappings at these establishments the beer wagon rolls to Mogger’s Restaurant, 908 Poplar St, which was a German immigrant’s brewery from 1848-1868, the pub of a Mattias Mogger. The arrival of Upland’s Champagne Velvet is set for about 6PM at Mogger’s where evening festivities will continue. The new Upland Champagne Velvet will be available for some sampling as early at April 1, at limited locations but after April 6 will roll out to bars, restaurants and liquor stores in kegs and 6-packs of 12 oz. bottles.

Here’s to a great run for the revival of the Champagne Velvet beer and Happy Anniversary to Upland Brewing!

thanks to Doug Dayhoff, Patrick Lynch, Matt Wisley, Jackson Heiss and Andrea Lutz, all of Upland