Upland Brewing organized the second annual Sour Wild Funk Fest, the Midwest’s premier wild ale festival, on Saturday, May 11, at Developer Town in the Broad Ripple area of Indianapolis. Approximately twenty breweries were represented including many Hoosier breweries, brewers from Ohio, from Illinois, from Michigan and some national powerhouses like New Belgium and Sam Adams. This years attenance was reported to be up substantially from last year but the crowd never felt like a ‘throng.’ Here’s our take from the two of us who attended:

When I first heard about Upland’s Sour Beer Fest last year, I had already been interested in sours for about a year, and been enjoying being able to get a hold of some good sours from around the country and occasionally the world. I loved last year’s festival. With such a small number of tickets compared to the microbrewers festival in Opti park the lines are much shorter and you get to try more beer!

This year I was lucky enough to snag a pair of VIP tickets, which apparently sold out in minutes. I enjoyed the VIP lecture style presentation from Caleb Staton, Upland’s Head Brewer. The presentation consisted of an overview sour brewing process, but the most interesting part in my opinion was Upland’s specific techniques. It is impressive how much trouble Upland goes through to create their spectacular sours. The list includes a vigorous cleaning each of their 141 barrels, a modified mash tun (capable of a turbid mash typical for Flemish style sours), as well as a 24 Hectoliter Foudre. The fruited lambics only use real fruit, no extracts, and none of their sours are artificially sweetened like the occasional Belgian brewery. Caleb is nobly focused on the exceptionally high quality of their sour program. The VIP portion ended with a sampling of Sour Reserve Batch #2, Raspberry Lambic (2011), and Cherry Lambic (2010).

The festival began and those of us in the VIP walked right in, while all the general admission ticket holders had to submit to getting the horrible re-entry stamp of a brown mustache. Anyway, on to the beers. As expected all of the Upland Sours were spectacular, including Sour Reserve Batch #1, and Batch #3, and a few Fruit Lambics I was able to try. Sun King’s All Brett Wee Mac was particularly tasty with some great characteristics from the different strains of brett used. Next up for me was Black Acre, a young brewery that had a tasty Raisin Sour, while their other option may have been lacking a little bit of complexity. Flat 12’s offerings were strong as always, and it was great seeing some of the other classic Indiana breweries, Barley Island, Mad Anthony embracing the sour tradition/trend. Some people may believe there are new trends in craft beer, which we’ll talk about later this week, but this beer fest shows me that there is still a growing audience for the complex traditional Belgian sour beers and the new American sours that are pushing the limits of what beer can be. I loved this festival again this year, and hope to see you at it next year. 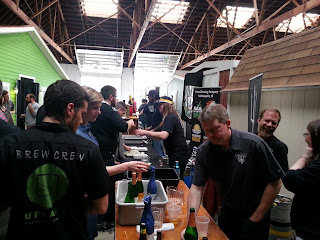 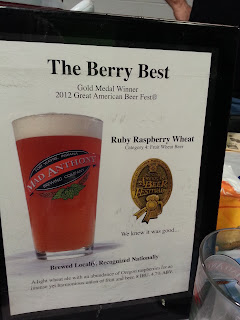 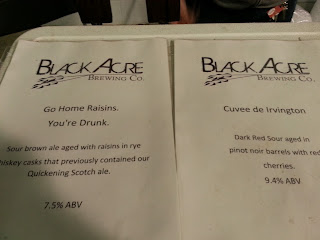 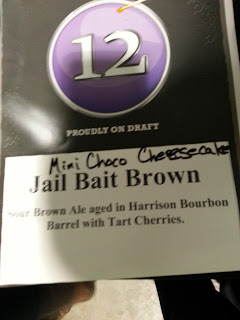 This is likely the true craft beer lovers’ fest. Brewers and staff alike commented that this is one of their favorite events because attendees like to chat about beers, spend time at each table, and sip rather than slam. The attendance proved there are plenty of beer lovers who appreciate tart beer.

Perhaps the most interesting samplings were from Destihl brewery of Normal and Champaign, Illinois. Their 5,000 square foot beer cellar contains over 300 oak barrels, both California wine barrels and bourbon barrels. In addition, they have imported French foudres, large oak casks for storage. They follow a traditional Belgian sour aging process of exposing the fermented beer in casks and barrels to the open air to pick up wild yeast. the Destihl four-and-a-half year old framboise was complex and impressively light at the same time. Their Saint Dekerra plain lambic had been barrel aging nearly two years and delivered a nice vanilla and wonderful sour notes. While Destihl brews or has brewed over 60 beers since opening in 2007, and have a wide variety of beer styles, clearly their focus on barrel aging is providing truly interesting and tasty results.

New Belgium Brewery has a fondness for this festival and provided a “Peach Felix Love” ale on tap that was aged first in the barrels used for their LaFolie and then in peach whiskey barrels. As one participant noted this provided the wonderful type of tartness that gives you a tug at the back and side of the tongue while delivering great flavor. This was one of those beers you could never get elsewhere unless you travel to New Belgium in Colorado and know the brewers.

I was particularly pleased that the beer I had agreed to help pour, Bloomington Brewing Company Cranberry Saison, was so well accepted and so many people made it to the end table of the fest specifically asking for this ale brewed with French Saison yeast and finished with fresh and concentrated cranberries! This was a delightful sample from the saison I’ve much appreciated before gaining very nice fruit flavor! Several noted beer judges came by because they had heard this one-off beer, not even available at the brew pub, was so good.

Steve of Crown Brewing (Home of the Crown Beer fest this next weekend from 2-6 on Sat., May 18) of Crown Point, IN, poured a Cherry Dunkel Weizen Bock, that gave a nice hint of cherry in the unusual setting of a dunkel weizen. This blending of cherry, banana esters, and spice was quite a nice delight!

SunKing’s Stupid Sexy Flanders (did you see that episode of the Simpson’s?) was a very nice base oud bruin with wild yeast, brettanomyces, and lacto!

Thirsty Dog from Dayton poured Cerasus Dog Flanders Red that was very smooth and a grest treat. As hard as I tried to recall the exact brewing process which on Saturday I recounted to others, alas, my notes started to fade – but I enjoyed this brew!

Another very interesting beer was Jon’s Triton Pink Ribbon Saison, obviously a saison but with pink and white peppercorns delivering a nice but not overpowering spice.

If you wanted a beer lighter in alcohol, Bell’s Oarsman is a very refreshing and full-of-flavor tart sessionable beer at 4% abv.

Thanks to Global Beer Network importers for serving Petrus pale, Petrus Oud Bruin, and Monk’s Cafe Flemish Sour. These Belgian beers (in bottles) give fest attendees a barometer for what these styles taste like when brewed in Belgium.

And thanks to Avery for shipping in bottles of Odio Equum which is brewed with red raspberries and aged in cabernet sauvignon barrels. Another beer I would not have wanted to miss!

Upland did not have much Dantillion, but a lucky few got a taste just as Starlight distributors from Southern Indiana also broke out a bottle of Cantillion from Brussels — but alas I was not in the right spot to taste and report which Cantillion.

The list could go on and on but we tried to show some restraint. Truly this is an event for those of us who appreciate tart and tasty ales!

Cheers, from Jake and GregKitz

Pics with Katie (and Mark in the background) from Destihl,
Mark from BBC, and Andrew from Upland 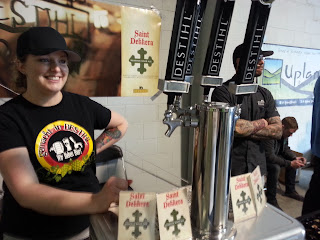 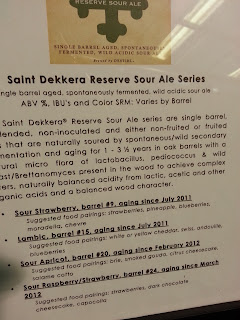 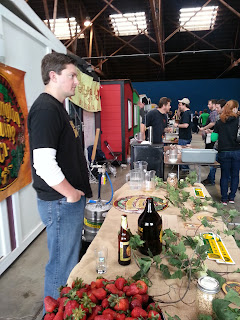 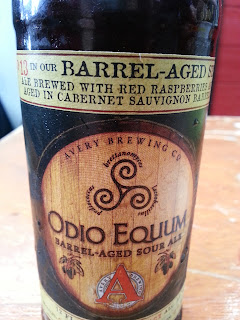 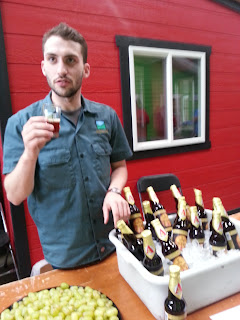 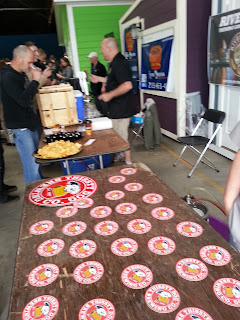