How to know what beers are being served? check out the web site, download the handy APP for iPhone or Android at beerfest.io

Flat12 Big Black Dog (Barrel aged) Stout (7% abv). a rich complex stout that delivers layers of light vanilla, slight sweetness, some chocolate, and toast; a brew I had more than once this week. Brewer Rob Caputo of Flat12 told me they will bring all specialty beers! Flat12 will share 4 experimentally hopped beers, 2 yeast experimentation beers, 3 barrel aged beers at least!

Upland Champagne Velvet 15th Anniversary beer. smooth light golden beer with a hint of corn sweetness as a nod to pre-prohibition and once Indiana’s major brand + Double Dragon Fly (oh, and we are betting on some SOURS )

And looking out for:
Crown Baklava Java porter,

People’s Hoosier Brown rye their brown is so solid, this version must be good

This is just a hint 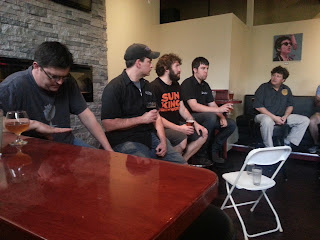 Saturday, 4/13, 4-7 Bloomington Beer Festival Our Man Nathan is with Brewers of Indiana Guild and will have an inside story

After Party: The Tap; SunKing and Flat12 pins