We came, we saw, we conquered, we called a cab. Hope everyone who was able to attend had another great experience at Winterfest. Here is a collection of thoughts, beer tastings, and photos from your friendly reporters at IndianaBeer. 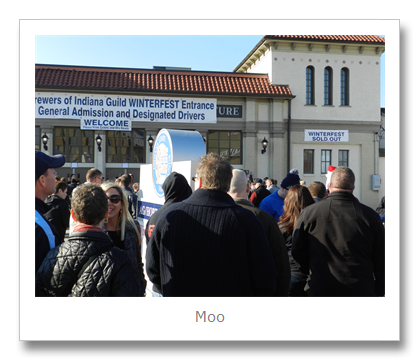 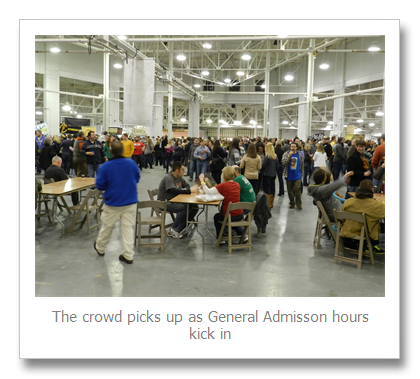 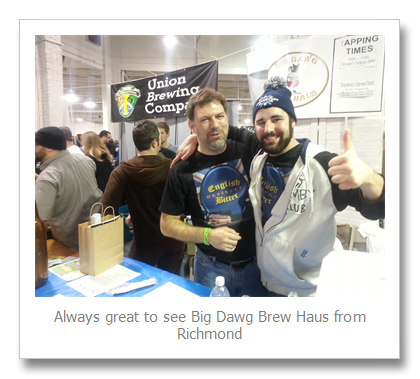 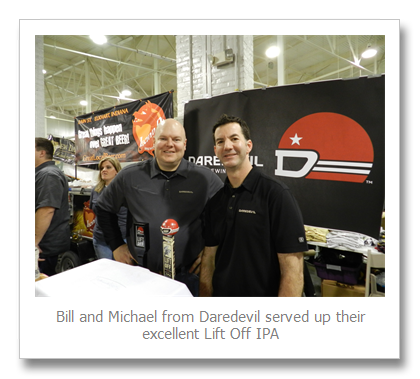 From Jason C…………. I think it’s safe to say that Bare Hands left the biggest impression on me.  Tried the Thai PA, 574, Mole Bride, and Peanut Butter Chocolate Stout and thought each one was pretty strong in overall quality.  Thai PA – An American style IPA brewed with Thai spices.  55 IBU, 7.1 ABV 574 – A single hop APA with piney, citrus, and tropical hop flavors.  50 IBU, 6% ABV Mole Bride – Mail Order Bride Russian Imperial Stout aged on Ancho Chiles, cocoa nibs, and Mexican cinnamon.  87 IBU, 10.2 ABV Peanut Butter Chocolate Stout – An Imperial Stout brewed with 100% cocoa and all natural peanut butter.  45 IBU, 9% ABV Sampled & enjoyed the Rooster American Brown Ale and the Lucky Dog American Pale Ale from Evil Czech (Culver).  This was my first exposure to Evil Czech and I felt the beers were pretty solid. Still have to mention the New Albanian Naughty Girl dry-hopped with cascade from the casks outside the building.  Love that stuff. Gotta work some People’s into the mix.  Amazon Princess American IPA is pretty incredible.  Heavy on the Simcoe hops, 62 IBU and 6.5% ABV You can put me in agreement with the Crown Coconut Java Porter being my favorite beer of the day.  It’s the only sample that I went back for multiple times. 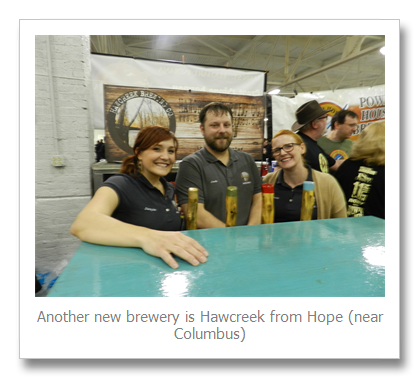 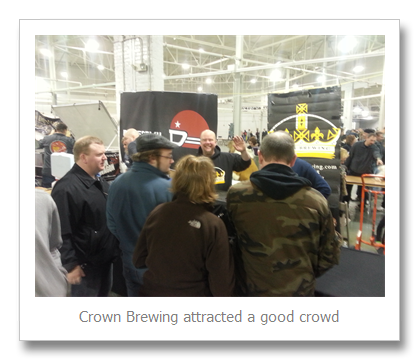 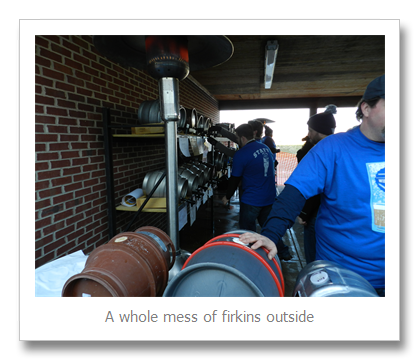 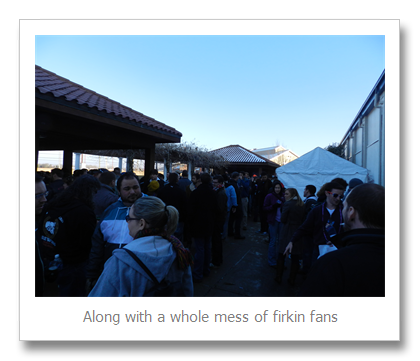 From Kathleen…………. It has been over a year since I’ve had a chance to really enjoy one of the bigger festivals featuring our Indiana brewing community and beyond.  Usually I’m part of the behind the scene beer festivities, but this year I decided to go VIP / media style and bring a newbie to the festival to try out all the awesome beers. I also took a different route this time that I usually do with beer festivals. I generally take a lot of pictures, but this time I was more focused on writing down what I was drinking.  Ironically I sampled the same amount of beer as my age. – 31! I won’t list them all, but I’ll list my highlights – Bier Brewery – Pumpkin Ale infused with Blueberries – I think blueberries was the "it" fruit for beers this festival. Many had either blueberry brews, infused blueberry brews or cask conditioned brews. Either way, Bier is one of my favorite breweries and I love their pumpkin ale, with the slight touch of sweet blueberry Finch Beer Company -  Secret Stache Stout – This was on my list pre-Winterfest. A Vanilla Cream Stout that made me shiver to my toes. Mad Anthony Brewing Co. – Imperial Pumpkin Ale – One sample of this and it was the top contender for my favorite pumpkin ale of all time, along with best of show for Winterfest. It was just the right amount of nutmeg and pumpkin pie spices and creamy at the same time. Cutter’s Brewing Company – Floyd’s Folly – A nice, slight smooth scottish ale Great Fermentations – Temple of Rye – I had to try this brew, with the contribution one of our own reporters, Nathan, and it was wonderful. Then again, I love porters, so the extra flavor of it being whiskey barrel aged was perfect. Figure 8 Brewing – Black Corridor – An Imperial Chocolate Ale cask conditioned with blueberries. Another one on my pre-Winterfest list. This one was outside in the firkin tents. I can’t even describe how delicious it was. Almost decadent dessert like beer. Zwanzigz -  Ghost Pepper infused Imperial Stout -  This was the winner of Winterfest for me. I love a nice hot spiced beer that is well balanced and the burn hit your mouth and throat right after swallowing.  I finished on this beer because it was too good to compete with anyone else. So those were my top beers. I did try some of the newbies –Union Brewing Company and Tin Man Brewing Company had a good regular style, session like beer. I tried Tin Man’s – Rivet which was their Amber and Union Brewing’s Cannonball Doyle – which actually tasted a little flat to me but – Bare Hand Brewery – Peanut Butter Chocolate Stout, Thai P.A., and Mole Bride inventive, well executed, great flavors. It made me want to venture to Granger, IN for more. Another tidbit I found out is Tuxedo Park Brewers Supply has brewing classes for free on Saturday from 11-4 if anyone is interested in brewing Lastly, Besides the sites of beer, and cool brewery signs, I really enjoyed the craziness of how far the pretzel necklaces have gone. I saw people with peanuts, cheese sticks, sausages, gigantic pretzels, fancy ribbon.  High five for creativity. Til Next time! – Cheers – Kathleen 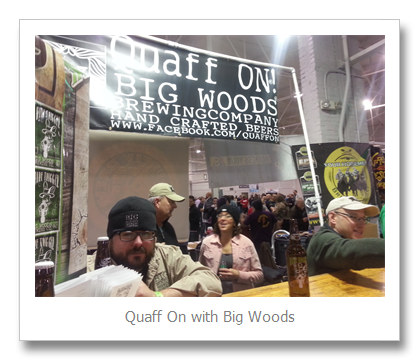 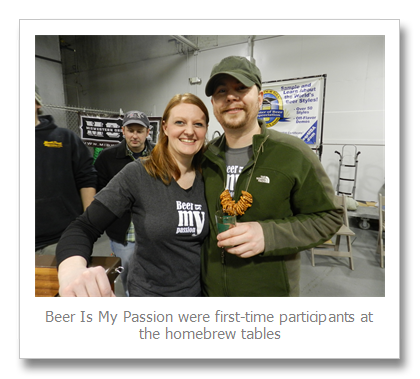 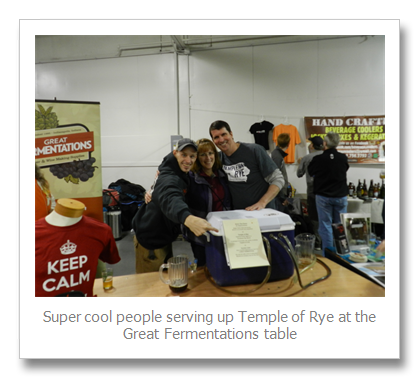 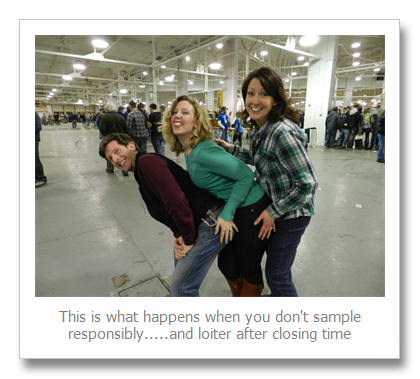 From Nathan…………. Festivals like Winterfest continue to be a microcosm of the craft beer scene in general: more breweries, more attendees, and a growing selection of boundary-pushing specialty beers. Tip of the cap to festival volunteers who always do a good job keeping the lines moving at opening time. Sure, we heard several comments that the VIP line didn’t seem very “VIP”, but that was more attributable to the sheer number of tickets sold. The crowd was terrific from what I witnessed – polite, enthusiastic, and having a great time. The growing trend of getting your beer and moving out of the way when others are waiting is also greatly appreciated. Since the number of breweries seems to grow as fast as the drinkers, you could always find an option that didn’t require a long wait to fill your cup. With that said, the days of Winterfest in the Ag Hort building are reaching a tipping point in my opinion. Barring moving the whole thing outside like our cousins to the north, this festival doesn’t have the expansive layout advantages of an open air event. Making your way to the next destination Saturday frequently felt like moving down Bourbon Street during Mardi Gras without the benefit of random nudity. It was all part of the experience there, but I’d rather not relive it at a beer festival. The addition of outdoor portable toilets were a godsend a few years back, but those also reached the point of being overwhelmed this year. On to the beer – unless you read from bottom to top my thunder has already been stolen on Bare Hands Brewery. But their approach was perfect to get attention at a large festival – give the people something they’ve never had before and do it well. Continuing to push in that direction could make them Indiana’s answer to Odd Side Ales in Michigan – that’s a good thing. Now on to my requisite Top 5 of the day: Pick of the Day: Crown Brewing Coconut Java Porter Bare Hands Mole Bride People’s Amazon Princess IPA (cask version) Union Brewing Cannonball Doyle ZwanzigZ Scotch Ale