Zwanzigz on 11th St. at Lafayette Av. in Columbus just passed their one year anniversary as a brewery but the brewer, Mike, brought over 20 years of brewing experience to turn out tasty brews and plenty of variety. Zwanzigz is an award winning pizza shop that almost exactly one year ago added their own beer and soda to the menu by expanding their building. In these 52 weeks they have produced 27 different beer styles! : 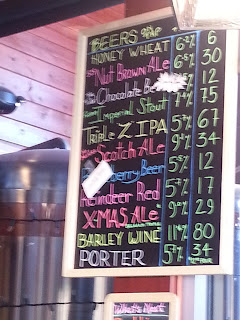 The first time I visited I was particularly smitten by the Chocolate Ale; not a stout but a clear ale with cocoa nibs added during finishing. This beer is delicious as a dessert! The Chocolate Ale is malty with a chocolate zing finish that delights the taste buds. That day I also tasted their Nut Brown Ale, another year-round beer for Zwanzigz. The nut brown gives that slightly sweet, nutty, caramel flavor at 6.5% ABV with 30 IBU.
The other regular brews from Zwanzigz include
Honey Wheat Ale: 6% ABV, 6 IBU, lightest in flavor but a nice residual sweetness
Triple Z IPA: 5% ABV, 67 IBU, a nice hop note without overpowering
Fulcrum Imperial Stout: 7% ABV 75 IBU, a delicious dark big stout
Blueberry Ale: 5% ABV, 12 IBU, fruity of course but a nice base ale behind the berries

On my recent visit I found their Scotch Ale Seasonal, as expected a big 9% ABV beer at 34 IBU, rich and malty. This is particularly well made and yummy.

Other seasonals on tap this past week included a Porter, a Red, a big barleywine at 11%, and a Tripel of a Christmas beer still around.

Besides a new beer nearly every other week in 2012, there are two other highlights of Zwanzigz! First, Soda made on the premises for both kids and adults. 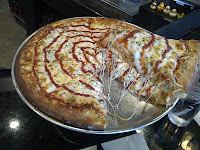 The kids can order a sampler just like the adults! We found our “little people taste panel” loved the orange, the raspberry, then the root beer and (my favorite) black cherry. It is perhaps a wierd situation when I am forced to choose between a great black cherry soda and a tasty brew! BOTH beer AND soda are available for carry out in growlers!

Second highlight is truly good pizza!
In the interest of science, no wait it was in the interest of my taste buds, we have now tried 3 varieties of the pizza and that leaves me wanting to get to Columbus, IN again for pizza and beer!

Kurt and Lisa Zwanzig clearly believe in quality!
Their brewhouse is compact but with wonderful equipment. For statistics lovers, they have a 10 hectoliter or about 8 barrel system. Their new bottling line (yep, small bottling system) is first class.

Locals will likely be able to have a six-pack of one of their favorite regular Zwanzigz beers delivered with their pizza and the mid-term plan is that in addition to growler carry out, Zwanzigz lovers will be able to pick up some of their great beers at other local stores.

Zwanzigz is about 30-35 minutes south of I-465 off of I-65 so easily accessible from Indianapolis.

As I write this I am anxious to try (again) one of their specialty beers at the Brewers Guild of Indiana Winterfest: Ghost Pepper Imperial Stout. You’d expect a lot of burn but the sample I have had has abundent rich dark malt flavor with a wonderful accent of spice and lingering slight zing at the finish! Keep it up Zwanzigz!